The National Chat with SPIN at ACL Fest

National members talk about influences and playing for Hollywood stars 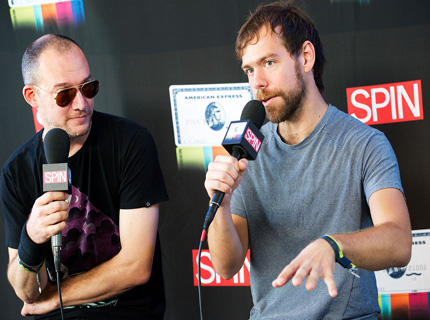 During this year’s Austin City Limits Music Festival in Austin, TX, artists stopped by the American Express® ZYNC ZONE, to chat with SPIN about their summer festival experiences and much more, among them indie rock heavyweights the National– watch our video interview, plus performance footage below!

Over the years, the National met loads of bands they adored at festivals, but gleaned particularly poignant advice from R.E.M. frontman frontman Michael Stipe, someone they admired long before they met him.

“We were playing a festival in Iceland and we looked to the side of the stage and Michael Stipe was standing there with Tim Robbins and Susan Sarandon and I literally peed myself,” guitarist Aaron Dessner said.”He took us aside at one point and said, don’t be afraid to write catchy songs or pop songs.We did embrace that on this record — even though it’s not a pop record, it’s our catchiest record.”

See our exclusive interview with the National below, and click here to check out more interviews from the American Express® ZYNC ZONE!Scalable, non-watermarked