Band offers full stream of Come Around Sundown, a week before its release. 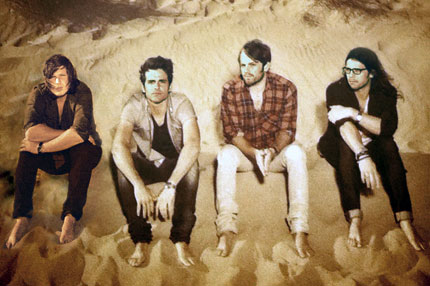 Kings of Leon will release one of the year’s biggest rock records next week but the Southern boys are offering up a free stream of the album to get fans psyched for Come Around Sundown’s release. Stream the album here and check out interviews with the band, where they talk about their whiskey-fueled recording sessions, below.

On Sundown, the Kings go for a bolder, more anthemic sound, which the band harnessed with Modest Mouse and Tom Waits producer Jacquire King. “No Money” is a raging rocker with virtuosic guitar shredding and the soaring tracks “The End” and “Mary” find the Kings delivering ballads not totally unlike U2.

But the Kings haven’t totally abandoned their Southern roots: “Back Down South” is a laid-back country ballad about going home, with frontman Caleb Followill crooning lyrics like “I got something here if you give me one more beer.”

Despite the Kings’ bolder sound on Sundown, the sessions for the record were laid-back. In a video interview about the record (which you can watch below), guitarist Matthew Followill reveals the Kings pounded plenty of whiskey in the studio. “For some reason, we started drinking whiskey so early, like right when we got [to the studio],” he says. “So by the end of the night, we’re like ‘Let’s just do some vocals and sing what Caleb’s singing — twenty people, all the crew, everybody that worked there were all in the room with a couple of room mics.”

Check out the rest of the behind-the-scenes interviews here.