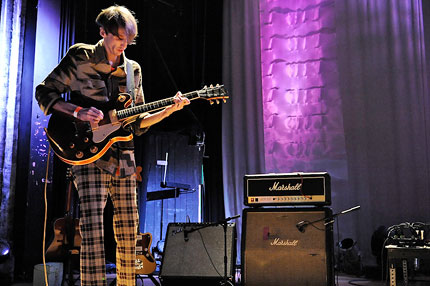 Change was in the air Friday night at Deerhunter’s U.S. tour kickoff in their hometown of Atlanta.

“Fall is here,” singer-guitarist Bradford Cox cheerfully said at the start of the night. “Leaves will be falling soon.” Aside from the seasonal shift, a new Deerhunter was onstage, one without blogosphere drama (beef with producers, unauthorized albums leaks, erratic website posts), onstage fellatio, and all manner of similar distractions (including Cox’s public nervous breakdown). In its place was a group that has weathered multiple lineup changes and built up a formidable catalogue, a group confidently led by Cox, who now dresses more like a well-to-do eccentric — plaid pants, dapper jacket, brightly colored shoes — than a young punk in a tattered Tupac t-shirt or a lacy dress.

Opening the evening with “Desire Lines,” a song sang by guitarist Lockett Pundt, spoke to this new, mature Deerhunter. While Pundt, who also fronts side-project Lotus Plaza, lacks Cox’s self-assurance, his songs are some of the best from Halcyon Digest, the band’s fourth full-length, released last week on 4AD. Live, Halcyon Digest’s tracks were a little more aggressive and untethered, a little less ambient and ethereal, augmented by vocal loops, amped-up distortion, and a tendency to wander off into Krautrockian tangents.

It was Deerhunter’s back-catalogue selections that truly impressed, though. “Nothing Ever Happened,” off 2008’s Microcastle, proved the epic highlight of the evening, delivered midset in the form of a driving Sprinsteen-esque rendition carried by Cox’s frantic lead guitar work, while the incomparable metronomic quality of Moses Archuleta’s drumming kept it all in check.

After the woozy “He Would Have Laughed,” Cox hinted at something special, saying, “I’m just going to plug this guitar in, as if it’s going to get played later,” then walked offstage. It was, of course, but not by Cox. For the encore, bassist Josh Fauver returned to the stage alone, plucking his four-string and playfully mugging for the crowd. Ex-Deerhunter guitarist Colin Mee, who played earlier in the evening with opener Hollow Stars, then came out to join him, picking up the Cox’s aforementioned guitar.

Before long, Cox returned, sans jacket, baggy t-shirt flapping, rapping a tambourine against the mic stand. For the trio of encore songs, it was like the Deerhunter of yore was onstage. “I forget what it’s like to not have a guitar,” Cox, sans six-string for the first time all night, said at the end of a raucous version of “Lake Somerset,” which included much screaming. “I don’t miss it.”

Following a by-the-numbers version of “Dr. Glass,” things got a little wild. During the evening’s finale, a sloppy, off-key rendition of “Strange Lights” that dissolved into a feedback-drenched jam session, Fauver and Mee traded their respective instruments, playing for a few moments before trading back again. Then, like a parting gift, Fauver handed his bass into the crowd and waved goodbye. Meanwhile, Mee was standing on his head at stage right, feet in the air. With a big grin, Cox followed Fauver’s lead, launching his tambourine into the darkness, then turning to embrace Pundt, the two of them pointing at Mee, like some sort of cheesy, frozen sitcom moment.

The crowd then started piling onstage, until it was packed tight with young people throwing high fives and removing their shirts. Archuleta played through the madness for five full minutes while cymbals were removed from his drum kit and passed amongst the stage’s denizens. His skinny frame emerging from the mass like a phoenix rising, Cox found his way onto the bass drum, held his two thumbs outstretched toward the ceiling and bid his hometown adieu.

Austin Ray
Tags: deerhunter, We Were There