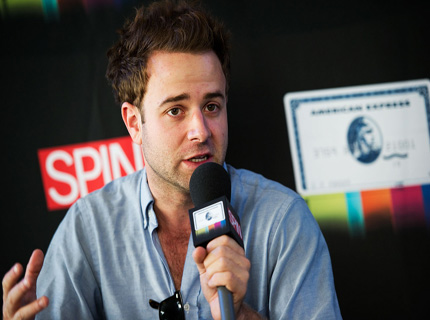 During this weekend’s ACL Music Festival in Austin, TX, artists stopped by the American Express® ZYNC ZONE, to chat with SPIN about their summer festival experiences and much more, among them L.A. rockers Dawes– watch our video interview, plus performance footage below!

2010 was the band’s first performance at an ACL and they wanted to make the most of it, citing audiences’ “openness and willingness” to hear new things, and expressing excitement about playing with established acts.

“Getting to play with these established artists has been really motivating and inspiring,” frontman Taylor Goldsmith said.”Knowing how to maintain the audience and keep them captivated it can be humbling for a smaller band like us, like this is what it takes to be professional.”

But Goldsmith also took the time to clear the air about his brother and the band’s drummer, Griffin, who may have been scaring a few of their band’s new fans.

“The faces he makes are amazing,” Taylor said.”People have come up to me after shows and been like your band is great, I don’t want to meet your drummer though because he seems like the meanest guy.He’s a real nice guy — he just makes a sour face when he drums!”

See our exclusive interview with Dawes below, and click here to check out more interviews from the American Express® ZYNC ZONE!