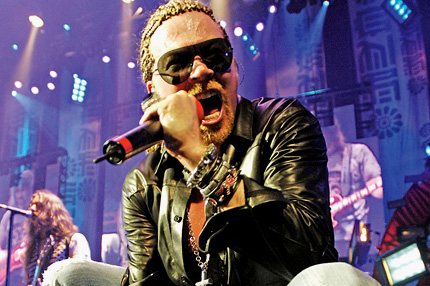 Axl Rose buried the hatchet with Duff McKagan at a Guns N’ Roses gig in London last night, bringing the bassist on stage to perform four songs. The concert marks the first time in seventeen years that the once-acrimonious bandmates have performed together. McKagan joined Rose for “You Could Be Mine,” “Nice Boys, “Knockin’ On Heaven’s Door,” and “Patience.”

(Watch some grainy fan footage below and check out a live photo — published by Skid Row singer Sebastian Bach, who was in attendance — here.)

According to Rock Radio (via Blabbermouth), Rose said the reunion was unplanned: The two ran into each other while staying in the same London hotel. “There was this guy at the end of my hallway playing all this loud music and shit,” Rose told the audience. “What the fuck? Oh — it’s Duff!”

But don’t count on a full-fledged Guns N’ Roses reunion happening anytime soon. Slash announced on his website that he’s auditioning new members for revamped version of Velvet Revolver, which features McKagan on bass. And in 2009, Rose told Billboard that “one of us will die before a reunion, and however sad, ugly or unfortunate anyone views it, it is how it is.”