The influential indie band return with their first new music in nine years. 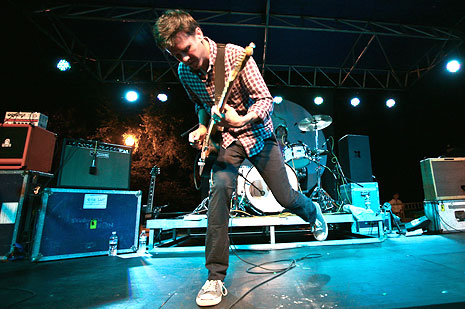 About a quarter of the way into Superchunk’s 20-song tour-opener Thursday night on the campus of Duke University in Durham, North Carolina, frontman Mac McCaughan was in a full-throttle lurch, pounding out the kind of tense and nervous post-punk squall on his ugly-ass Gibson Marauder thatlaunched a thousand pop-punk bands.

“I bet you’ve lost sight of everything,” he sang during “Let It Go,” from the band’s eponymous 1990 debut. “I know the pleasure that repulsion brings” – and then, on the refrain, the veins in his neck bulging, McCaughan wailed out, “Let it go, let it go, let it go!”

If Majesty Shredding, Superchunk’s latest disc and first album of new material in nine years, is any indication, McCaughan and company haven’t lost sight of anything and they’re not letting go of that influential indie-rock howl that they, along with the likes of Pavement, Sebadoh and Nirvana, helped bring from the margins of rock to the Billboard charts.

Neither have their home-state fans, many of whom greeted each other on the grassy knoll outside the university’s Nasher Museum of Art at around 8 p.m. as if the band’s outdoor album-release party was some kind of indie-rock Big Chill.

It was a perfect night – clear, with a bright half-moon; breezy and not too hot. The crowd, mostly in their 30s and 40s, came dressed in requisite indie attire: sneakers, work pants or shorts, unbuttoned flannels over T-shirts emblazoned with band logos like Dinosaur Jr. and Sonic Youth. There were conspicuous new faces, too: young children on the shoulders of moms and dads. It seems the generation of slack motherfuckers has grown up, gotten jobs, and gone gray.

The band was kicking off its 14-city Majesty Shredding tour, which will take them up the east coast through D.C. and New York before winding up in Los Angeles on Oct. 19. They hit the stage around 8:35, roaring into a note-perfect “So Convinced,” from1999’s Come Pick Me Up, and “Water Wings,” from 1994’s Foolish, before debuting the new album’s jangly, anthemic “Crossed Wires.”

The bandmembers, all now in their early 40s, were as energetic as they were during their mid-’90s prime. McCaughan, wearing a red, black, and white plaid shirt, skinny blue work pants, and Converse sneakers, jumped spastically about the stage as bassist Laura Ballance, in a black dress and pink socks that matched her pink earplugs, stood with her Fender Precision hanging low and her feet apart, thrusting forward like a dark-haired Kim Gordon.

Ballance, McCaughan, guitarist Jim Wilbur, and drummer Jon Wurster created waves of fuzzy distortion on Majesty Shredding’s slow-paced centerpiece, the post-punk ballad “Fractures in Plaster.” During the album’s pop-punk single”Digging for Something,” John Darnielle of the Mountain Goats – one of many critical darlings on McCaughan and Ballance’s hugely successful Durham-based indie label, Merge – jumped onstage to join in on the refrain.

He was followed by a trumpet player, tuba player and trombonist, who brought a sonic density that sent the crowd into a frenzy. The band followed up with the pounding “Hyper Enough,” from 1995’s Here’s Where the Strings Come In.

As the crowd dispersed at the end of the hour-and-a-half show, guitarist Wilbur sat on the edge of the stage soaking it all in and reflecting on the band’s longevity. “When you’ve been doing this for 20 years,” he said, “you kind of feel like, ‘What the fuck?'” He laughed. “I mean, really, it’s kind of a mind-fuck. Most jobs don’t last 20 years. Hell, most marriages don’t last 20 years.”

Mark Kemp
Tags: superchunk, We Were There