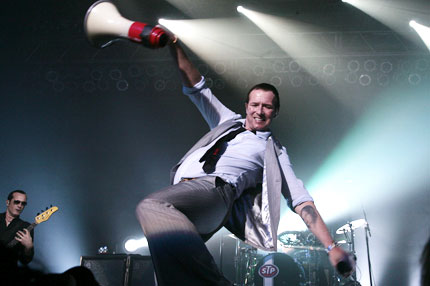 Stone Temple Pilots have suspended their current U.S. tour, postponing 10 shows in Texas, Oklahoma, and the Southeast. The band’s label did not offer an explanation in a statement, only saying the band will be taking a “short break” before resuming the tour October 8 in Tampa, FL.

The announcement comes after frontman Scott Weiland’s bizarre rant at a Houston gig on Sunday, where the singer rambled about his divorce, beating heroin addiction, and why he started drinking again. “On the 8 of December will be the time when I stopped doing dope,” Weiland said. “I started drinking again. I got divorced from my wife and my whole world basically spun around.” (Watch the video of Weiland’s rant below.)

As SPIN previously reported in a recent cover story, Weiland has taken to drinking scotch on occasion.

The Houston Press reports that STP were late for their show and that the rest of the gig was riddled with problems. Weiland has also been rumored to be performing with the help of a backing track at gigs.

Will this be a simple speed bump for STP, or is trouble brewing in this big-ticket reunion? Sound off in the comments.