Band will play each of their albums in their entirety this October. Guitarist Carl Broemel gives the low down. 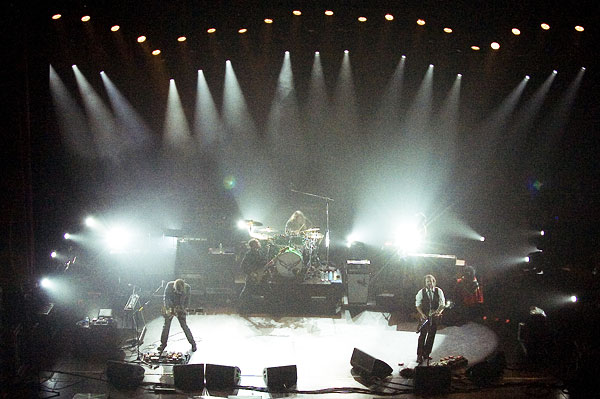 While a new My Morning Jacket album is tentatively scheduled for 2011, the Kentucky rockers will revisit their past this October in New York City for a five-night stand during which they’ll play each of their five studio albums in their entirety.

“I’m really looking forward to it, even thought it is kind of a daunting project,” guitarist Carl Broemel tells SPIN.com. “We have a huge list of songs we need to work on. The actual albums themselves will be the easy part. Super old EP stuff or covers we haven’t played in years — that’s where the real work is involved. We’re going to get together for a few days and make our master plan for those nights.”

The special series of shows kicks off Oct. 18 at Terminal 5, with MMJ playing their 1999 debut, The Tennessee Fire, and Broemel thinks that show presents the biggest challenge. “The first night will be the hardest, as far as getting songs together that we’ve never played before, but I think we’ve pretty much played everything once,” he says.

“It’s going to be cool to not think about the setlist so much,” says Broemel. “Usually, we try to make each show specific to the city we’re playing, which is more challenging, since there are so many songs we love to play.”

As for new material, Broemel says the band will be convening in Louisville for a full month before the end of 2010 to finish off their as-yet-untitled sixth studio album, but they’ve avoided setting any hard deadlines, so as not to put undue pressure on the upcoming sessions.

Fans hitting the NYC shows might hear a sneak preview of some of the new songs. “We’ve been playing two new songs that are probably going to be on the record,” says Broemel. “It’s a good thing in a way to have a song out there beforehand because it’s good to play songs live, and we basically record all the songs live now.”

What direction do you think the new MMJ album will take? Sound off in the comments.