The rapper gets two days of community service in wake of June arrest. 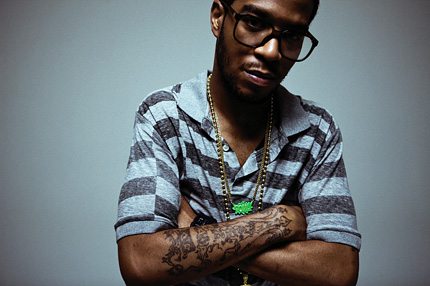 Cudi was booked June 11 after police were called to respond to a domestic disturbance, where the rapper allegedly smashed the cellphone of a woman, thought to be his girlfriend, and tore an apartment door off its hinges.

In SPIN’s October issue, Cudi talked about his night in jail, after his arrest: “I had a newfound respect for T.I. and [Lil] Wayne. I only spent 15 hours in there! I was scared straight, going through the shakes, having no food, being held captive. It didn’t matter who I was in the world.”

Cudi told SPIN he began using cocaine and marijuana to take the edge off during interviews, where journalists would ask prying questions about his personal life and childhood.

“I started doing cocaine to be more upbeat,” he said. “I’d do bumps and smoke [weed], so I wouldn’t be so edgy. I didn’t know people would be like, ‘So, what was it like when you lost your dad?’?”

Read an excerpt of the SPIN feature here.

Cudi’s much-hyped second album, Man on the Moon II: The Legend of Mr. Rager, is set for a Nov. 9 release date, and its lyrics delve deeply into Cudi’s drug use and party-heavy lifestyle, which he says he’s putting in the rearview. “It’s a chapter of my life I’m closing,” he told SPIN. Read SPIN’s album review here.