FInd out why the Nick Cave-led band isn't named Vortex and the Teenage Jerks. 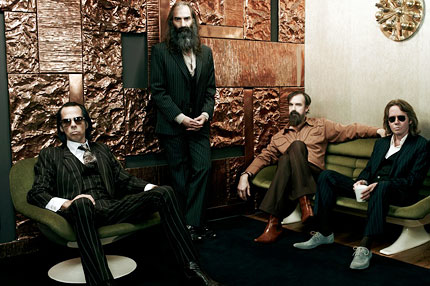 This week: Legendary rocker Nick Cave’s Grinderman, whose Grinderman 2 is out September 14.

Why Grinderman: “We went into the studio without a name,” admits drummer Jim Sclavunos, who along with Cave,multi-instrumentalist Warren Ellis, and bassist Martyn P. Casey formedthe band in 2006. “We’d known we were going to record, we just never thought to come up with a name ahead of time. When we finally got around to it, we found that all the names we wanted to use were taken. No matter how far out on the name limb we went, someone had been there first. For example, we considered the charmingly derogatory C**t Ox. There was already a Captain C**t Ox on MySpace. Things were looking pretty hopeless. Then one day we were jamming and Nick was riffing on the lyrics to a John Lee Hooker song called ‘Grinderman Blues.’ For whatever reason, that just seemed to fit. It felt appropriately malevolent.”

Previously Rejected Names: “For a moment, it looked as if we might call ourselves Vortex.”

Best Band Names Ever: “Lothar & the Hand People. This was a psychedelic band from the late ’60s. Lothar wasn’t the name of anyone in the band; it was the name of the theremin that they used. Or at least that’s how legend has it.”

Worst Band Name Ever: “Despite my love of Lothar & the Hand People, they’re an example of a pet peeve of mine regarding band names. I don’t like So and So and the Somethings. Like Teenage Jesus and the Jerks. I have an ideological problem with that style of band name. It sets up a dichotomy between the singer and the band. You either have a band or you don’t. It shouldn’t be presented as two separate entities. Even Nick Cave and the Bad Seeds, I don’t like that. The Bad Seeds? How tough do they think they are? It seems a bit overwrought. It’s got a venerable history, though.”

Exclusive! On the Road With Grinderman