In the Studio: Black Lips

Singer-guitarist Cole Alexander on the Atlanta garage rock foursome's "more commercial" next album, out in early 2011. 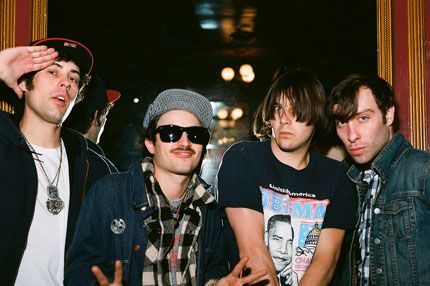 Atlanta’s Black Lips are indie rock’s bad boys: they start barroom brawls, play a raucous brand of garage rock, and piss, spit, and spray beer on (and sometimes shoot fireworks at) each other during their live sets. The band was even chased out of India exposing their penises onstage.

But now Black Lips are cleaning up their act. Well, kind of.

For their upcoming sixth studio album, slated for January or February, the band abandoned the charmingly slapdash recording style of their past efforts, and are spending more time in the studio. They’ve been recording since 2009 in various studios, including Deerhunter’s digs where they teamed with the band’s guitarist-producer Lockett Pundt. They even reached out to super-producer Mark Ronson to gauge his interest in applying his signature sound to their yet-to-be-titled album.

“We’re just spending a lot of time and making sure it’s awesome,” singer-guitarist Cole Alexander, 28, tells SPIN.com. “This album is going to be more commercial. We want to reach a lot more people. But we’re still keeping it real.”

By “real,” he means Black Lips are aiming to go mainstream on their own terms: writing songs about drunken Native Americans and dumpster diving, and experimenting with country sounds. Oh, and they’re also using a human skull as an instrument. Seriously.

Hey, Cole! Tell me about a few of the new songs.
There’s one song called “You Keep on Running,” and it’s based on this book I have called Black Confederates and Afro Yankees in Civil War Virginia. I pulled a lot of weird words from the book that I had never heard before, like racist words against white people. For example, “bukra.” I had never heard that before. We also have a song about Chief Noc-A-Homa, the former mascot for the Atlanta Braves baseball team. The guy who acted as the mascot was a real Native American and he used to do prayer dances on the pitcher’s mound. A lot of the other Native Americans were bummed out on him. Apparently he drank a lot and would pass out in this teepee that was part of his shtick. He was just a nice guy who rooted for the team. He eventually got fired for running around the field drunk.

There are also straight country sounds on the record. We’ve dabbled in a country sounds before, but these new songs aren’t like indie kids trying to do country. One of the country songs is called “So Long to Carolina,” which is like a Woody Guthrie folk song. Another is “Dumpster Diving,” which is an ode to trash and finding new treasures. I’ve had great fortune dumpster diving. [Drummer] Joe Bradley was searching through some garbage once in Hawaii and found a lap steel guitar from the ’40s or ’50s. It works perfect. We’ve been using it on the album. One time, after the September 11 attacks, we were dumpster diving and found five boxes of urinal pads-you know, the ones in public toilets-with stickers of Osama Bin Laden’s face on them. We gave them away at shows.But they weren’t that well thought out. When you peed the sticker stopped the hole in the toilet, so the pee would splash back on you. It was almost like Osama Bin Laden was spraying piss at you from his mouth. I love dumpster diving. It’s one of my passions.

Are there any ideas for the album title yet?
No, not really. But I will say, conceptually, we’re doing something interactive with this album. We’re going to utilize a lot of technology for a concept around the release of the album. I don’t want to give away too much, but it’s going to be surreal, like an alternate reality thing.

The four band members typically split vocals. What’s the break down this time?
Ian [St. Pe], our rhythm guitarist, has been singing more. We’re finding that he has a pretty good voice. We’re still picking the track list, but we’ll narrow down the album to 12 or 13 songs. We recorded probably 25.

It sounds like there are a lot of different instruments on the new album.
Definitely. On a couple of songs I’m using an old school talk box. The vocoder has gotten really popular, but I can’t stand that sound. But back in the ’50s and ’60s, before Peter Frampton was using talking guitars, artists named Alvino Rey and Pete Drake used a more primitive form. It’s a more warm and organic sounding. We’re also using this human skull.

Come again?
Yeah. I’d been searching for a human skull and I found one in New York City. We used it as an echo chamber. One of our favorite bands, the 13th Floor Elevators, had a jug player who would makes noises into a jug and it would reverberate. So we used the skull the same way. When music reverberates in your head it has a certain sound based on the geometry of your head. So this resembles the echo you would hear in your head at a live concert. Also, if you believe in spirituality, it’s cool with the trippy spiritual implications of the sound going through this particular person’s skull. It’s also straight up creepy. The eyes and the nose created a problem during recording because the sound escapes there. But I’d just put my hand over the nose and eyes — problem solved.

Are there specific influences that are shaping the album?
Pete Drake was my main inspiration. He was a pedal steel player from Atlanta, GA, and he went on to Nashville to work as a studio musician. He played on “Lay, Lady, Lay” by Bob Dylan, “Stand By Your Man” by Tammy Wynette, and on George Harrison’s “All Things Must Pass.” On his own songs he played his talking pedal steel. I was trying to get that same sound. We also listened to this English electronic artist from the ’60s named Delia Derbyshire. She was in a group called White Noise. I’m really into electronic music. We used some electronics for the first time. On a song called “Wildest Dreams” we used these theremin-sounding synthesizers.

From GZA to King Khan, Black Lips have had a lot of collaborators.Are there any on the new album?
Not right now, but there might be. There’s a guy named Kermit Quinn that I want to work with. I heard his song on a Gatorade commercial, which David Banner produced. [Quinn] has this old soul sound, like Otis Redding, so I wanted to reach out to him about singing on the album. That would be fun. We’ll see. I thought about talking to Diplo, too.

Is there anything you can’t live without while recording in the studio?
Beer and Cheetos. That’s all anyone needs.