There is much to do and see and eat and smell at Lollapalooza, a seemingly endless expanse of diverse attractions and concessions smacked improbably in the center of a major metropolis that offers surprises at every turn. Or, you can park your keester in one spot all day and let the entertainment come to you. Welcome to Lazypalooza.

The Sony Bloggie stage seemed to have the best potential for a sedentary Saturday afternoon — it’s in a relatively lush corner of Grant Park and had bands we wanted to see anyway. Plus, it’s fun to say “Bloggie.”

1:03 PM: With two albums called Free Drugs and Hippies, the Austin, Texas trio Harlem are perfectly engineered for festival work. Good humor, bare-bones Nuggets-y garage rock, constant energy as singers Michael Coomers and Curtis O’Hara switch off between guitar and drums. Despite the obscenely early (for young rock bands, anyway) hour, nothing sounded any more shambling than it was designed to, yet the band cut their set short one song, followed by Coomers tweeting, “That sucked.” Not sure what the problem was, looked like good, ragged fun to me. 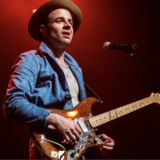 1:48 PM: Grant Park has some drainage issues. All of Chicago’s mosquitoes are also spending their Lazypalooza at the Sony Bloggie stage.

1:50 PM: Does leaving the immediate premises to get a giant pulled pork sandwich and chocolate cream pie milkshake constitute a violation of Lazypalooza restrictions? Hoping not.

2:16 PM: &nbspLollapalooza is kind of a sausage party, and that’s only partially because of Chicago’s fine tradition of hot dog and bratwurst stands. One of the few, if not the only band here with an all-female lineup, L.A.’s Warpaint draw out heavy-psych jams that don’t sound much like the Black Crowes album of the same name. Actress Shannyn Sossaman used to play drums, and her sister Jenny Lindberg is still the singer-bassist. The more you know!

3:40 PM: More with the hazy throwback L.A. rock as Dawes get their Bloggie stage on. Taylor Goldsmith and pals deliver a front-porch vibe that’s well suited to wasted afternoons like this, and the crowd seems to be building steadily as the harmonies reach out onto the festival’s main promenade. Or maybe they’re just getting into position for Edward Sharpe?

5:55 PM: Hmm. Mighta been they were just getting into position for Edward Sharpe. There kind of isn’t anywhere to sit around and be lazy unless you consider getting kicked in the face to be your idea of a slothful Saturday. People are bunching up behind and alongside the stage. Should this be renamed the Laurel Canyon Part-Time Actor Bloggie stage?

6:32 PM: Somehow, when I wasn’t paying close attention, Edward Sharpe and the Magnetic Zeros became the biggest festival band working right now. Taking the stage barefoot and dirty like he’s been sleeping rough on the festival grounds rather than in a four-star Chicago hotel, Alex Ebert and his crew of also-shoeless, but still comely, traveling hoboes take the stage and way more people than could reasonably fit here explode into some sort of group-ecstasy swaying and singing. Isn’t this how Manson got started? Charlie, not Shirley. Not sure how Ebert is gonna go back to his Ima Robot digs after getting a taste of this level of worship, but it’s telling that the music itself isn’t as hippie-dippie as the band’s general aesthetic might suggest. They’re more like an Arcade Fire with a sunnier worldview and no indoor plumbing.

7:15 PM: And Lazypalooza comes to an emotional end. Because of the collective catharsis from the jubilant music, sure, why not, but really because it’s just now hitting me how long a walk it is to where Green Day’s playing. Who’s got a helicopter?