The provocative pop princess gets rowdy while performing her hits for a packed house of fans. 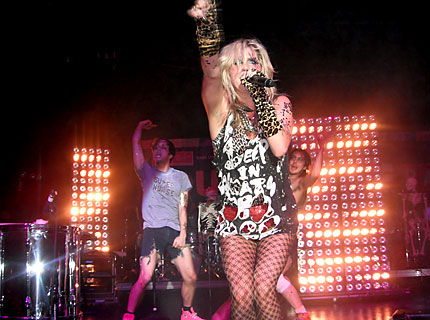 Love her or hate her, Ke$ha knows how to throw a party.

The pop provocateur sauntered onstage for her free concert at NYC’s Roseland Ballroom in aviator sunglasses, ripped glitter t-shirt, and fingerless cheetah-print gloves while a recording of rapper Flo Rida’s 2009 hit “Right Round” blasted in the background. Singing the hook on the track was Ke$ha’s first big break. The song is also responsible for the dollar-sign addition to the Nashville transplant’s stage name-a reference to the fact that while recording it Ke$ha had minor celebrity, but not a whole lot of cash.

A year later, though, the packed house was there to see Ke$ha perform her own hits.

The 9-song, 40-minute set was a celebration of her recent cover for Paper magazine, showcasing fan favorites from her No. 1 debut album, Animal. And the exuberant, dance-ready crowd knew every word.

Later on, new synth-heavy single “Take It Off” found these same dancers stripped down to nothing but their tattered jean shorts.

Ke$ha eventually took a break from jumping around the stage for the auto-tuned slow burner “Stephen,” installing herself at the keyboard as violet-hued lights created a soft halo around her wild blonde hair and glitter makeup. Of course, she undercut this moment of sincerity with her explanation of the song: “Not to be a pussy, but I’m gonna sing a song about a dude…the motherf***er won’t call me!”

That’s the thing about Ke$ha, she doesn’t seem as though she’s taking herself seriously and doesn’t beg anyone else to. She layers her insanely catchy pop music and over-the-top stage persona with a comic irony. And as she closed out the set with her chart-topping hits “Your Love is My Drug” and “Tik Tok,” blasting her glitter-filled toy bazooka into the crowd, her fans screamed along to show they wouldn’t have it any other way.

Kelsey Paine
Tags: ke$ha, We Were There