Vic Chesnutt: When the Bottom Fell Out

Last Christmas Vic Chesnutt delivered on the promise of a career's worth of haunting, darkly comic songs and took his own life. David Peisner talks to his friends and family to get the untold story of one of rock's most curious characters. 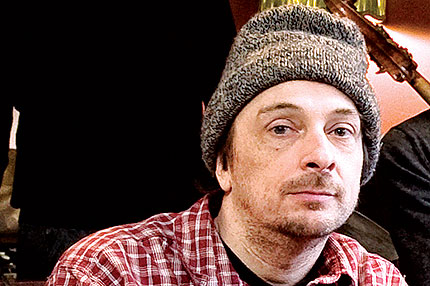 Last Christmas, Vic Chesnutt delivered on the promise of a career’s worth of haunting, darkly comic songs and took his own life. David Peisner talks to his friends and family to get the untold story of one of rock’s most curious characters. [Magazine excerpt]

Chesnutt, his face heavy with scraggly stubble, propped a small wooden guitar on his lap as he slouched in the wheelchair he’d used since breaking his neck in a car accident in 1983. A blue long-sleeved shirt and brown pants covered his frail frame and a striped gardening hat perched atop his head. It was the final show of a 29-city tour, and Chesnutt was, according to Griffin, tired, in some noticeable physical pain, and bummed to be parting ways with his band. Talking to a reporter the day before, he called his backing group — most had appeared on his recently released album At the Cut — “the most powerful band anyone ever put together.”

As the concert neared its end, that barely sounded hyperbolic. A harrowing, thunderous version of Chesnutt’s self-lacerating opus “Coward” yielded to “Flirted With You All My Life,” a tune the Athens, Georgia–based singer-songwriter had repeatedly described as “a breakup song with death.” Over a lilting guitar, warm organ riff, and shuffling beat, Chesnutt, who had attempted suicide several times, sat, dwarfed by a massive wooden cross on the pulpit behind him, and howled the final chorus: “O Death, really, I’m not ready.” He’d recently reiterated that point while discussing the song on NPR’s Fresh Air, saying in no uncertain terms, “I’m not ready to kill myself.”

Less than three weeks later, on Christmas Day, the 45-year-old Chesnutt was dead from an intentional overdose of muscle relaxants.

On a pretty evening in Athens, two months after Chesnutt’s suicide, I sit outside a small café with Howe Gelb of the Tucson desert-folk iconoclasts Giant Sand. He’s in town to play a Chesnutt tribute show.

“He was absolutely the finest singer-songwriter in this country,” says Gelb. “Nobody sang better than him, nobody performed better. He influenced so many people.”

Chesnutt never sold many records. According to Soundscan, his 14 albums moved 104,000 copies. In total. On first listen, his songs could sound bizarre, even silly, and his voice, which ranged from a nasally, Dylanesque whine to a savage bellow, was wildly unconventional. Despite being loosely characterized as a folk singer, he bounced freely among delicate acoustic ditties, stormy Southern rockers, punk stomps, country bummers, avant-garde art-rock collages, and goofy novelty tunes.

This creative restlessness did him no favors commercially, but his gift for language, his ability to scramble high and low culture, and juxtapose the sacred with the profane, uncovered the beauty, humor, and truth in some of the darkest corners of the world and himself, winning him a small but devoted following that included, it seems, every revered songwriter who’d ever heard him. Michael Stipe and Bob Mould were early supporters, Patti Smith and Jonathan Richman loved him, Kurt Cobain once stopped by his house to tell him he was a fan, and Neutral Milk Hotel’s notoriously reclusive Jeff Mangum not only attended his funeral but closed it by singing “Independence Day,” Chesnutt’s 1990 salute to another hyperliterate suicide (“Hemingway, you did yourself justice / So here’s to you, you articulate dead fisherman”).

“He was this wickedly charming man singing truthful, well-crafted songs,” says Lucinda Williams, after whom Chesnutt named one of his best-loved songs. “He deserved much more notoriety. Now that he’s gone, maybe more people will listen.”

A few hours after I meet Gelb, the Drive-by Truckers’ Patterson Hood is onstage at the 40 Watt Club, in front of a crowd more in the mood for a raucous wake than a reverent memorial. Hood saw Chesnutt for the first time at the 40 Watt back in the mid-’90s and was blown away.

“Pretty much from the first song, I stood there with my mouth gaping open, amazed,” he tells me later. “It was almost like a religious experience. He had this fearlessness about exposing things about himself or his feelings about things that might make people cringe or make his grandmama cry, but he could write about the most dark, primal stuff and still somehow be funny.”

I had made tentative plans to meet up with Sparklehorse’s Mark Linkous as well, but Linkous didn’t show. He’d been to Chesnutt’s funeral, and the two were close friends with a lot in common — both idiosyncratic, Southern singer-songwriters with morbid streaks. Two weeks later, on the day when Linkous would shoot himself through the heart with a rifle, visitors to the Sparklehorse website were eerily greeted by a photo tribute to Chesnutt.

Later that night, Chesnutt’s wife, Tina, makes the rounds, accepting concerned greetings from friends. The two got married in 1990, and for years she was his companion, caretaker, muse, and, frequently, his bassist. When I’d seen her previously, she’d always looked quiet and formidable — the steady hand on Chesnutt’s shaky vessel — but now she looks exhausted, shell-shocked, and out of sorts. I introduce myself, and she forces a polite smile.

“I’m glad someone’s writing about him, but I’m not ready to talk about it,” she says, shaking her head. “I don’t know if I’ll ever be.”

Read the complete Vic Chesnutt feature in the July 2010 issue of SPIN, on newsstands now.