Paul Gray's body was discovered near his hometown of Des Moines, Iowa. Click here for details. 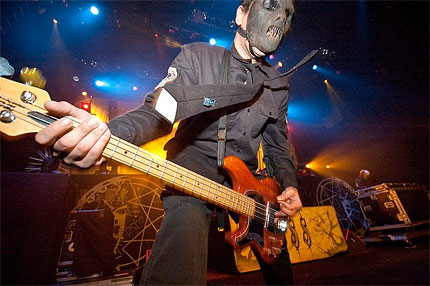 Paul Gray, bassist for alt-metal vets Slipknot, was discovered dead Monday in an Iowa hotel room. He was 38.

Details are scarce, but the Des Moines Register reports that a hotel employee found Gray at the TownePlace Suites hotel in Urbandale, a suburb of Des Moines, the band’s hometown. Police do not suspect foul play.

The Polk County Medical Examiner’s Office plans to conduct an autopsy Tuesday. A toxicology test will also be conducted to determine any contributing factors in Gray’s death.

Gray, known to fans as “#2″ or “The Pig,” was a founding member of the Grammy-winning band, who are known for wearing masks onstage. Slipknot’s last album, All Hope is Gone, debuted in the No. 1 spot on the Billboard chart. Gray has also performed with Unida, Drop Dead Gorgeous, and Reggie and the Full Effect during his career.

In 2003, Gray was arrested on drug charges after police discovered small amounts of marijuana, cocaine, and two syringes in his Porsche following a traffic accident in Des Moines. Gray later admitted he was using drugs at the time of the accident. He was sentenced to one year informal probation.