‘Glee’ Star Directs Thao & Get Down Stay Down

Dianna Agron, aka Quinn Fabray on the hit FOX show, heads behind the camera on clip for "Body." 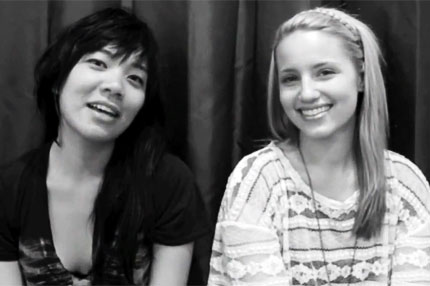 Dianna Agron is a rising star in front of the camera, playing knocked-up cheerleader (and former president of her school’s Celibacy Club) Quinn Fabray on FOX’s hit show Glee, but now she’s taking a turn behind the lens, directing a new music video for Bay Area indie rockers Thao & the Get Down Stay Down — and it’s all for a good cause!

The video premiered on the website for Oxfam America, a non-profit whose mission is to end poverty and injustice. “It’s an incredible international aid organization, and they very respectfully help people overcome poverty throughout the world, and are great champions of social justice,” Thao Nguyen says in the video’s intro. “The effects of climate change… really have combined to make it almost impossible for women to provide for their families.”

Both Nguyen and Agron are urging viewers to check out Oxfam’s campaign encouraging Congress to compose an aggressive, comprehensive climate change bill in 2010, and have its provisions kick in sooner than the 10-year timeline proposed in current legislation. Get all the info here.

As for the clip itself, it came together when fellow Bay Area native Agron — an avowed indie rock fan, as she told SPIN last year — approached Nguyen about directing a video. “We met one day on Skype while I was on tour in Europe and Dianna was on set,” Nguyen explains. “‘Body’ [from her band’s SPIN-approved 2009 album Know Better Learn Faster] was shot on Valentine’s Day on Dianna’s bed.”

Watch it below and tell us what you think in the comments section.

Peter Gaston
Tags: glee, thao with the get down stay down, the wire, Videos