The Blink-182 punk and the Rated R pop diva joins forces in the studio. 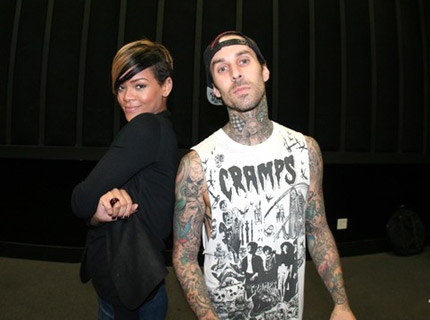 Rihanna is putting the deep, hard beats of her music into her own hands by learning to play the drums — and she’s hired the best possible instructor: Blink-182 sticksman Travis Barker.

“Teaching Rihanna some things on drums,” Barker Tweeted on Tuesday, along with a photo of the duo at a Los Angeles studio. “She JAMS!!!!! Watch out for her!!”

A source has told People that Rihanna — who appears behind the kit in her music video for “Rude Boy,” off her latest album Rated R — wants to play like a pro and take her skills onstage during her upcoming European and U.K. tour, which kicks off April 16 in Belgium.

While he’s not in the studio with Rihanna, Professor Barker has a plenty going on. He recently debuted his new collaboration with A-Track and will hit the studio with Blink’s Mark Hoppus and Tom DeLonge to record their upcoming reunion album, expected in 2011.