On their ongoing world arena tour in support of 2009’s The Resistance, Muse singer-guitarist Matt Bellamy, drummer Dominic Howard, and bassist Chris Wolstenholme perform while positioned in the middle of giant columns tricked out with mega-sized video screens, while green lasers scan the crowd and multi-colored strobes light the stage.

At Friday night’s secret MySpace show at Stubb’s, the band ditched the columns. That change, and playing to a couple thousand fewer fans than normal, meant the British prog-pop stars’ presentation amounted to their version of a stripped down gig. (Oh what most bands at SXSW would sacrifice to experience this version of intimacy). But even if the trio delivered the pocket-sized version of the Muse phantasmagoria, it didn’t stint on the music, delivering a coolly entertaining hour-long set to the fans who’d braved the long lines to get inside.

Opening with the new album’s martial fight song “Uprising,” Bellamy quickly assumed the hero role, pumping a rebellious fist in the air while singing the “We will be victorious” chorus and then blasting forth with a variety of fleet-fingered guitar licks as Howard thwacked out rapid-fire fills and Wolstenholme pulled busy basslines. 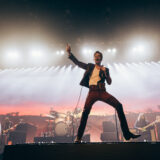 From there, the band alternated between the heavy and poppy sides of its diverse catalog, with Bellamy, clad simply in a white t-shirt and slacks, pausing just for a quick thank you to the crowd.

The glammy “Supermassive Black Hole,” with its seductively grinding guitar riff, was followed by the anthemic rally cry of “Resistance,” which in turn led into one of the set’s few seemingly spontaneous moments, as Bellamy led the band through a brief instrumental medley of a very Hendrixian “The Star-Spangled Banner” and the jackhammer funk bridge from AC/DC’s “Back In Black.”

Though Muse’s insistent bombast and virtuoso precision can make songs like the multi-part Queen-indebted (and flawlessly performed) “United States of Eurasia” feel like the musical equivalent of military exercises — a feeling not helped by the constant lighting fusillades — it did show off a diversity of sound that is sometimes lost amidst their albums’ glossy glare.

Coldplay’s Chris Martin should be kicking himself for not writing the gorgeously melodic, chiming ballad “Starlight” and would be hard-pressed to come up with a song as futuristically funky as the synth-driven “Undisclosed Desires,” which was accompanied by green rays of light dancing dramatically above the crowds’ head.

The throbbing set-closer “Knights of Cydonia,” an intergalactic gallop through showy drumming and heavy low-string guitar riffs, sent the audience home on a wave of metallic power.

Austin might not have been treated to the full Muse experience, but even the scaled down version displayed far more musical pomp and theatrical muscle than most bands have the audacity — or budget — to deliver.

muse, We Were There