Watch a performance from one of SPIN's 10 to Watch in 2010 in the SPIN/MySpace Music Loft! 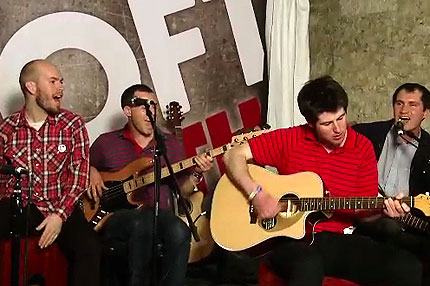 When you’re spending four days in Austin, Texas, seeing loads of ear-pounding rock’n’roll, it’s always a pleasure to turn down the volume and see some truly remarkable artists play in quieter, stripped-down settings. That’s what happened at the SPIN/MySpace Music Loft on 6th Street when San Diego rockers the Soft Pack stopped by to perform three songs for a lucky audience. Watch below!

The Soft Pack, who were named one of SPIN’s 10 Artists to Watch in 2010, and, like many bands in Austin last week, played a multitude of showcases and parties, brought their surf-inflected garage rock into our loft for a super slick performance.

Check out the video here, and catch the Soft Pack on tour this Spring and Summer, including a headline jaunt that starts today in Dallas, Texas, and wraps at April’s Coachella festival in California.