Canadian indie rock collective leak a pair of tracks from their May release, Forgiveness Rock Record. 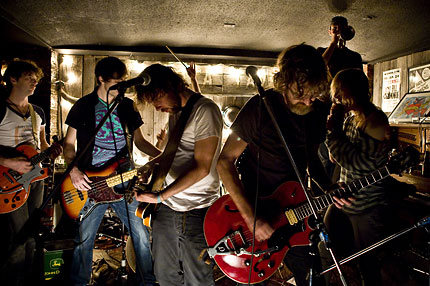 It’s a special present from our friendly neighbors to the north: Toronto’s Broken Social Scene have released two new songs from their upcoming album, Forgiveness Rock Record, out May 4.

The tracks — “Forced to Love” and “All to All” — showcase two very different sides of the Canadian collective. “Forced to Love” is a fast-paced, riff-heavy rocker with aggressive vocals from frontman Kevin Drew. “All to All,” meanwhile, brings the intensity way down, focusing on quiet electronic ambience and gorgeous, airy vocals.

This is the second time the band have teased fans with material from their upcoming album. Last month, they dropped the terrific “World Sick,” their first new song in five years.

Listen to both new songs — plus “World Sick” — below, then tell us what you think in the comments section.