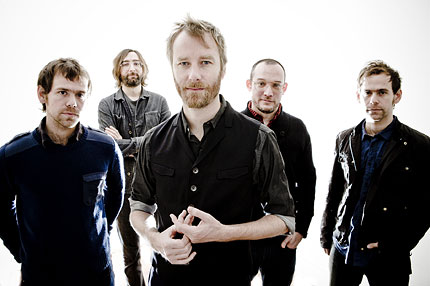 The release of the National’s new album, High Violet, is still six weeks away, but the Brooklyn-via-Cincinnati quintet are offering up a free download “Bloodbuzz Ohio” as a preview to fans. Download the song here.

The track features large, sweeping layers of piano, drums, and guitar laid beneath singer Matt Berninger’s smooth, melancholy baritone. “I still owe money to the money to the money I owe / I never thought about love / When I thought about home,” he sings, making this song something of a downer — but, as is usually the case with this band, it’s a gripping and gorgeous one.

The band has been busy prepping for High Violet’s May 11 release, appearing earlier this month on Late Night with Jimmy Fallon to debut “Terrible Love.”

Later that same week, the guys played a two intimate gigs at the Bell House in Brooklyn, where they unveiled even more music off High Violet. SPIN was on hand and noted that the audience, which included R.E.M.’s Michael Stipe, was “spellbound” by the new material, which turned out to be “very much worth waiting for.”

The National play this weekend’s Big Ears Festival in Knoxville, Tennessee, then hit the road in April for a tour that will take them across the U.S., as well as to Canada and Europe. In the meantime, have a listen to “Bloodbuzz Ohio” and let us know what you think in the comments.