Jake Gyllenhaal, RZA, and Lil Jon show also act in the clip for "Giving Up the Gun." 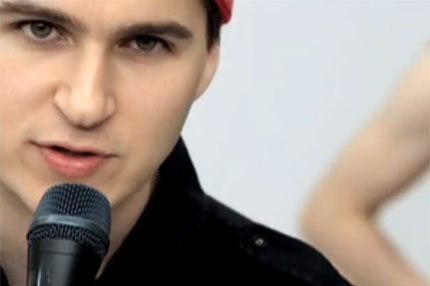 If there’s one thing Vampire Weekend prove in their new video for “Giving Up the Gun,” off their chart-topping new album Contra, it’s that they have the most random group of friends ever. Joe Jonas, meet RZA. Jake Gyllenhaal, say hello to Lil Jon.

All four of those guys appear in the clip, which pits a redheaded cutie against a string of opponents in a tennis tournament, officiated by Wu-Tang Clan member RZA. She duels Jonas and Gyllenhaal, and even scores a few tips on the proper backstroke from Lil Jon. The whole surreal competition takes place in a shiny white room with Vampire Weekend performing the infectious tune in the background.

If that’s not alluring enough, the video also features a shot of Gyllenhaal tearing off his track pants to reveal blue short-shorts underneath. Whew. And we thought Vampire Weekend’s Rancid cover was random.

WATCH:Vampire Weekend’s “Giving Up the Gun”