"Do you have guidos in France?" 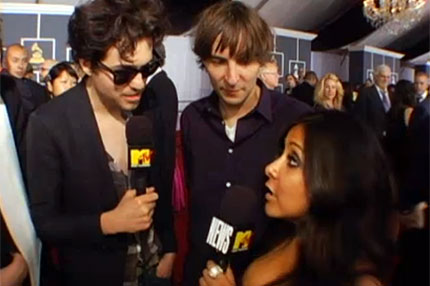 Exhibit A: Sunday night at the Grammys, where French popsters Phoenix won a statue for Best Alternative Album, Snooki, the overly-tanned queen of MTV’s hit show Jersey Shore, approached the polite Parisian boys on the red carpet for the weirdest interview we’ve seen since Alexa Chung’s show was cancelled by the network.

The funniest part: Despite Phoenix’s ubiquity in 2009 (playing SNL, Letterman, and more) and Jersey Shore’s skyrocketing ratings and penetration into pop culture, neither interviewer or interviewees had any idea who the other was! Thus comedy ensures.

Frontman Thomas Mars [in broken French]: “Oh, no, we are French.”

[Staring at guitarist Laurent Brancowitz] “Oh my god. You know who you look like? Have you ever watched Twilight? You look like the vampire Edward!”

Snooki: “That makes you look really hot right now. Hey, I have a really serious question…. Do you have guidos in France?

Watch the interview below, then tell us what you think in the comment section!