How They Became… The Flaming Lips

Frontman Wayne Coyne shares the story behind his band's name. 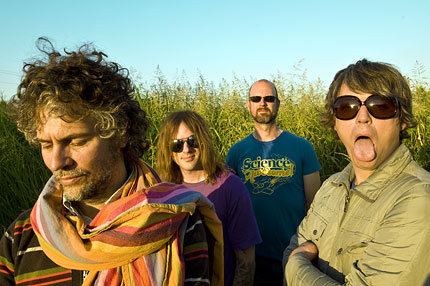 Why the Flaming Lips: “Back in 1983 when we were approaching our first gig,” recalls frontman Wayne Coyne, “we really didn’t know what we were gonna be called. It was still sort of the punk era back then, but we didn’t want to be called something too political like the Dead Kennedys. I’d read somewhere about a group called the Flaming Hands, which was a name I’d liked and that led to the Flaming Lips. But I’ve had a lot of people come up to me and tell me that they really know where the name comes from. Some folks have told me that I got the name from an old Fred Astaire musical that it supposedly shows up in. Others said we took it from a quote by Ralph Waldo Emerson. Nope, it happened like I said it did. I even remember making a flyer for the show where I cut out a picture of a woman with her legs spread and put a mouth over her, uh, parts — so there was this idea of a throbbing orifice. It just proves that if a man is completely left to his own devices, he’ll always go straight for vaginas.”

Previously Rejected Names: “Oh, we had a bunch of ridiculous ideas. We had considered things like the Tijuana Toads; the Corporation; the Firm. Silly names like that.”

Best Band Names Ever: “Echo and the Bunnymen and Sonic Youth are both good ones. So is the Teardrop Explodes.”