Looking back on the expiring year, the New Moon star reveals the songs that helped her on set. 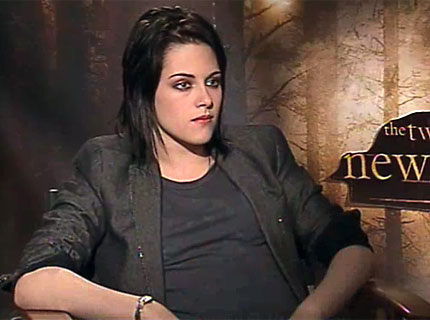 Music permeates the Twilight novels and films — so it’s no surprise that it plays a big role on set, too. For Kristen Stewart, two songs in particular — and not ones from the film’s hot-selling soundtrack — were in heavy rotation when New Moon was filming in Italy.

Two contrasting artists — Australian chanteuse Sia and iconic post-punk band Joy Division — racked up the plays on Stewart’s iPod. Watch the video clip below and find out why she adored their songs.

Stewart, her New Moon co-stars, Rihanna, 50 Cent, the Black Eyed Peas, and more will be looking back on the year in music this weekend on Fuse’s Top 40 of ’09: The Year in Music special, which premieres Saturday, Dec. 12 at 4 P.M. EST, and airs throughout December.

Watch Chvrches’ “Down Side of Me” Video Directed by Kristen Stewart

Preview Chvrches’ “Down Side of Me” Video Directed by Kristen Stewart