EdVed and Co. fill in for an absent opening act with a unique adhoc set, treating fans to classics and new Backspacer tunes! 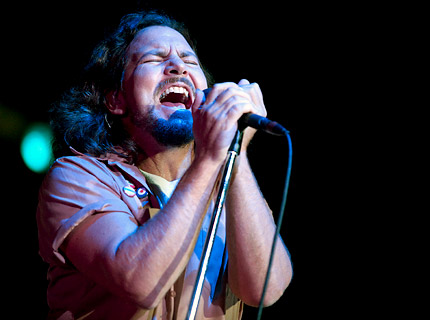 Pearl Jam have a habit of handpicking various indie rock underdogs as their opening acts, like Ted Leo, who was set to open the first stop on the Seattle band’s North American tour Friday night in Toronto. Sadly, weather prevented Leo from making his 7:30 P.M. set time. No worries. Pearl Jam had an excellent back-up opening band on hand: Pearl Jam.

Or, rather, a coffeehouse open-mic version of Pearl Jam. In lieu of Leo, PJ frontman Eddie Vedder took the stage by himself, treating early arrivals to a pair of Neil Young covers (“Sugar Mountain” and “The Needle and the Damage Done”), followed by a two-song solo set from guitarist Mike McCready, and a Johnny Thunders tribute courtesy of Stone Gossard, who contributed a folkie overhaul of the late New York Doll’s junkie hymn “You Can’t Put Your Arm Around a Memory.”

Soon after, Vedder reappeared with bassist Jeff Ament to tackle the old Pearl Jam rarity “Bee Girl,” before ceding the stage to the Pharmacists, who had all managed to arrive except frontman Leo. James Canty (formerly of DC indie rockers the Make Up) continued the covers theme with hard-charging renditions of the Misfits’ “Hybrid Moments” and the Ramones’ “Blitzkrieg Bop.”

Vedder, McCready, and Gossard then reappeared to announce the formation of a new band — Eddie Vedder and the Pharmacists — at which point the hastily formed supergroup kicked into a raucous cover of the Stooges’ “Search and Destroy.” The players pulled it off so effortlessly it was a testament to their musical abilities and a confirmation of the song’s everlasting value as punk-rock Esperonto.

McCready sported a KISS Alive! t-shirt and drummer Matt Cameron wore a David Bowie/Aladdin Sane shirt, but the band’s free-wheeling, bare-bones approach transcended the choreographed limitations of arena shows like those made famous by Kiss and Bowie, where set lists are often synched up (and, thus, locked into) to lighting cues, videos, and other special effects; by contrast, PJ’s set list unfolded like their entire discography on shuffle, pulling equal portions of anthems and obscurities from all corners of their career.

The show also served as a preview of the fivesome’s upcoming album, Backspacer, their leanest, most immediate record since 1993’s Vs.

Lead single “The Fixer” — given an early airing during the set — certainly portends a renewal of sorts, as its rousing yeah yeah yeah chorus was shouted back by a 16,000-strong crowd that had clearly spent time streaming it on MySpace.

The political significance of Pearl Jam opening their tour in this Canadian mecca was not lost on Vedder, who used a mid-set pause to admonish the right-wing hysteria over health-care reform “in the country that is just below you,” comparing his embarrassment over the debate-cum-debacle to that of seeing a dog at a fancy dinner party “licking its own asshole,” while labeling profit-hungry pharmaceutical companies as “the real death panels.”

But the speechifying stopped there. Instead, Vedder spent the latter portion of the set ceding mic control to the crowd, who contributed lead vocals to “Alive,” “Elderly Woman Behind the Counter in a Small Town,” “Better Man,” “Porch,” and (in yet another flagrant appeal to Canuck pride) a show-closing, curfew-busting rip through Neil Young’s “Rocking in the Free World.”

Given the fragile state of the music industry, Pearl Jam won’t sell 10 million copies of an album anymore and they definitely aren’t youngsters. But while everything has changed, Friday night’s masterfully idiosyncratic tour opener proved that for Pearl Jam and their fans absolutely nothing has changed.

Stuart Berman
Tags: Eddie Vedder, pearl jam, We Were There