Lollapalooza weekend comes to a grand finale with the live debut of the trio's super-dupergroup. 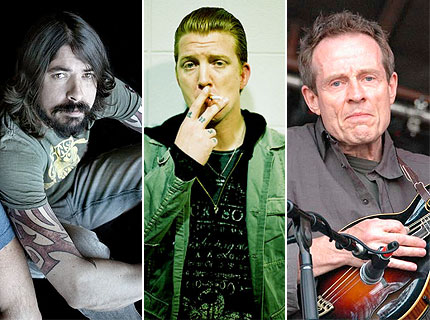 As if there weren’t enough bands cluttering Chicago this past weekend, Them Crooked Vultures — featuring Queens of the Stone Age’s Josh Homme on guitar and vocals, Dave Grohl on drums, Led Zeppelin’s John Paul Jones on bass and keytar (!), and longtime Queens cohort Alain Johannes on rhythm guitar — made their not-so-secret debut at the hot, sweaty, and overpacked Metro midnight Sunday. Though there was no press invited and cameras were verboten, an enthused SPIN.com operative was among the thousand or so lucky few to get in.

Casual and punishing at the same time, the easiest musical touchstone is probably Songs for the Deaf-era QOTSA circa 2004, which featured Grohl on drums both on record and on a handful of live dates. Bearded in a black sleeveless T-shirt, Grohl was in full Animal-from-The Muppet Show mode, smiling broadly and pounding the hell out of his drums. Homme swigged Coronas out in front, driving a set of a dozen or so all-new songs described as “pulsating, powerhouse caveman rock.” So, no big surprise there.

Jones’s keys — and really, his mere presence (pun intended) — added an eerie, even regal vibe. And not more than an hour after the show began, Homme said, “We are Them Crooked Vultures — good night,” and exited to the strains of “Hail, Hail Rock N’ Roll.” No encore. But we’ll presumably get a chance to hear the songs again this fall on the band’s debut album.