The singer is sentenced amid charges of two previous attacks on his former girlfriend. 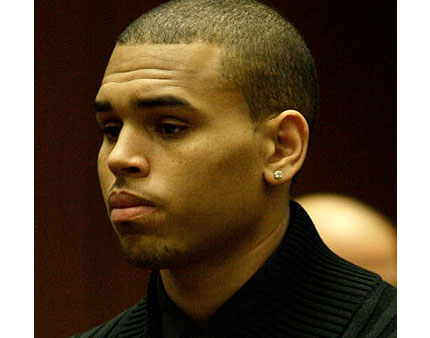 This sentence upheld the plea deal Brown made in June to avoid jail time. Judge Patricia Schnegg had delayed the sentencing from earlier this month. Domestic violence advocates have argued that the plea agreement and sentencing sends kids the wrong message and that Brown received a lenient sentence due to his celebrity. [Via NY Daily News].

Judge Schnegg also upheld the protective order, issued in March, which demands that Brown remain at least 100 yards away from Rihanna, except at music industry events where the distance is only 10 yards. She even reprimanded Brown for potentially having violated the order, saying she is “not immune from the chatter that has been on the airwaves” about rumored meetings between the couple. Brown cannot legally see Rihanna until his probation is complete, August 25, 2014.

Rihanna has stated that she objects to the order, and her past efforts to get it lifted have failed [LA Times]. However, according to her lawyer Donald Etra, Rihanna found the other terms of Brown’s sentencing acceptable.”Rihanna was advised of the plea agreement before it was entered by Mr. Brown,” he said. “She did not object at that time. The stay-away order was imposed by the court.”

The judge’s ruling followed a report filed by Brown’s probation officer alleging that two domestic violence incidents occurred between the couple prior to the February incident, which left Rihanna black and blue. The first reportedly occurred in Europe three months prior, in which a verbal dispute turned ugly when, after getting slapped, Brown slammed Rihanna against a wall.

The second reportedly took place just three weeks before Brown’s pre-Grammy arrest, when the singer erupted while the pair was driving in Rihanna’s native Barbados. He allegedly stopped the car in a rage and broke both the driver’s and front passenger’s side windows. As no one was injured, the incident was not reported.