The Lil Wayne protÃ©gÃ© coaches a basketball team of hotties in his just-released clip, directed by hip-hop's biggest star. 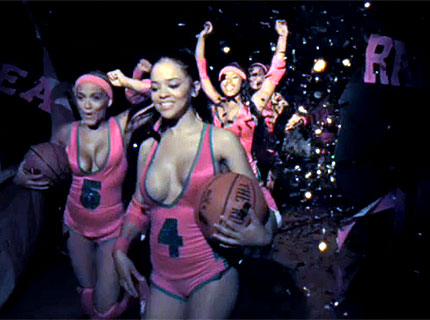 It appears Lil Wayne protégé Drake thinks that classic basketball movies like Hoosiers were in need of a little more T&A and a little less athletics. Which may be why the hot-to-trot rap sensation gathered a team of total hotties for the just-released music video for his breakout hit “Best I Ever Had.” Or, perhaps, it’s a work-related fantasy — after all, Drake, a.k.a. Aubrey Graham, played wheelchair-bound basketball star Jimmy Brooks on the Canadian teen soap opera Degrassi: The Next Generation.

Directed by hip-hop superstar Kanye West, the clip for the first single from Drake’s in-the-works debut, Thank Me Later, is jam-packed with sexy ladies… all playing what might be the worst game of basketball ever. Luckily for frazzled coach Drake (not to mention us), the teammates’ scantily-clad outfits and, ahem, creative pre-game stretches keeps the focus away from their utter lack of b-ball skills.Meanwhile, Drake delivers his pompous lines with smooth flow: “When my album drops, bitches will buy it for my picture / And the nigg*s will buy it, too, and claim they got it for their sister.”

Watch: Drake, “Best I Ever Had”