Does their new song suck -- or do you love it? Yorn explains how he and the sexy actress got together. 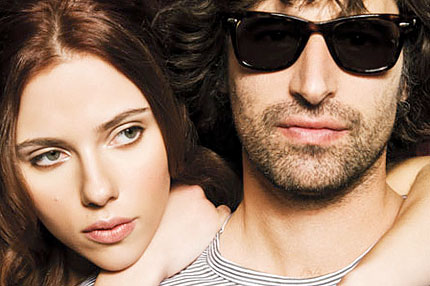 Safe to say: Pete Yorn has a soft spot for milky, busty actresses. Turns out, his new album of duets with Iron Man 2’s Scarlett Johansson, Break Up, was inspired by ’60s French sextress Brigitte Bardot.

“After I kind of dozed off one afternoon for a few minutes, I just woke up and my heart was racing and I had this thing in my head … ‘I have to do a duets album, a guy-girl album,'” Yorn told Billboard.com. “I was really into Bonnie and Clyde at the time, by Serge and Brigitte, and I thought, ‘Brigitte … Scarlett! She’s Brigitte!’ It was a really manic thought pattern that was going on. Within 10 minutes, I was texting Scarlett, ‘We have to make a record!'”

And make a record they did. Break Up, due September 15, was recorded in February of 2007 in producer Sunny Levine’s garage studio in Los Angeles. The album features eight songs written by Yorn and a cover of former Big Star frontman Chris Bell’s 1978 song “I Am the Cosmos,” and tells the story of — what else? — the end of a relationship.

Johansson — who hadn’t yet recorded Anywhere I Lay My Head, her 2008 album of Tom Waits covers — only showed up for two days of the session, but Yorn said she nailed her parts right away. “She blew me away with how fast she learned the songs,” he said.

So how does Break Up hold up to Bonnie and Clyde, Gainsbourg and Bardot’s quirky 1968 album about the doomed relationship of crime’s most infamous duo? If the first single, “Realtor,” is any indication of the rest of the album, Yorn and Johansson’s duet will be just as funky and clever! Check out the track here!