Fred Durst and Co. return with a free gig in Sin City. Click here for a review! 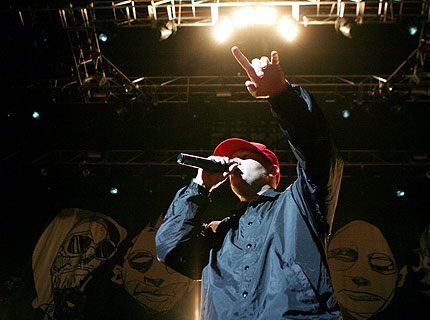 “Why is everybody always picking on me?” Limp Bizkit frontman Fred Durst asked in song. “Does anybody really know a thing about me?”

It was a rhetorical question, of course, voiced at Limp Bizkit’s first U.S. gig in five years at the Pearl in Las Vegas on Saturday night, with Durst spitting out his words as if they were coated in something foul tasting. Make no mistake, Durst knows very well why he’s the kind of guy many love to hate: He cultivates loathing like it was a cash crop, with tunes that double as giant middle fingers in sonic form.

True to their M.O., Limp Bizkit flipped the world the bird in grand fashion throughout their 15-song set, which heavily mined the group’s 2000 release Chocolate Starfish and the Hot Dog Flavored Water, an album that sold over a million copies in its first week of release.

Those days are long gone.

For Limp Bizkit’s triumphant return to the States after playing big music festivals in Europe this summer, the band struggled to fill a 2,500-seat venue, even though it was promoted as a free show.

Still, the group managed to conjure up a blustery surge of raw energy, with the underrated rhythm section of drummer John Otto and bassist Sam Rivers creating a thick and tensile bottom end that you could feel in your chest.

Then there was the spectacularly fierce riffing of oddball guitarist Wes Borland, who took the stage slathered in red body paint, sporting a Spartan-like helmet with a gold face mask that made him look like a bloodied extra from 300.

But of course, the center of the show was Durst, pistoning his knees high up the air, whipping his arms around like he was hurling invisible fastballs. Though Durst is a newlywed who, two days earlier, had Tweeted that he had gotten married — and who, during the show, gave a shout out to his wife Esther, who was sitting in the wings — he pulsed with pent-up rage, not marital bliss.

Durst has always traded in this kind of generalized, opaque angst.

During the Limp Bizkit’s heyday in the late ’90s, the country was prosperous with a loose, intern-lovin’ president, the tech bubble had yet to burst, file-sharing was just beginning to impact the music industry, and there really wasn’t a whole lot to be pissed off about, as compared to the war and recession wracked years that would follow. As such, there were seldom any clear targets in Durst’s crosshairs, just vague “haters” that Durst himself did his best to provoke so that he would have something, anything to direct his ire at.

Hence, he reveled in obnoxiousness for the sake of being obnoxious, a Gen-X Johnny Rotten with baggier pants and an allergic reaction to irony.

At the Pearl, Durst was alternately a lascivious ladies man (“I’d love to sniff on them panties now,” he panted on “Eat You Alive”), a potty-mouthed philosopher (“Ain’t it a shame that you can’t say ‘fuck’? ‘Fuck’ is just a word and it’s all fucked up,” he thundered on “Hot Dog”), and an all-around agitator whose worldview you could summarize in but five words: “Everything is fucked. Everybody sucks.” That bit of wisdom came from “Break Stuff,” perhaps the purest distillation of the directionless anger that more than anything else defines this band.

“I know why you wanna hate me,” Durst bellowed during a seething “Take a Look Around” at the show’s end. “‘Cause hate is all the world has even seen lately.”

But really, it was hard to see much of anything with all of Durst’s spit clouding our eyes.

Jason Bracelin
Tags: Limp Bizkit, We Were There