The pair talk about Los Angeles, Denny's, and more as a part of Beck's latest web project! 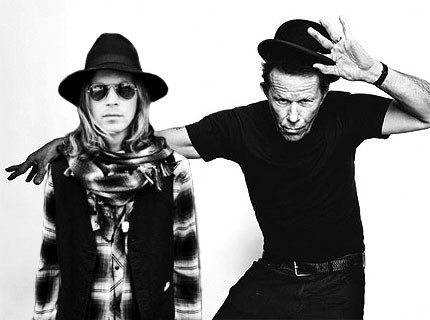 Beck’s official web site is quickly becoming one of the most innovative in the music biz. First, the singer launched the Record Club, a project that has him and some famous friends covering classic albums like The Velvet Underground and Nico. Next, he announced plans to stream a weekly DJ mix set called Planned Obsolescence. Now, he’s interviewing fellow-Angelino Tom Waits.

Irrelevant Topics is a new section where Beck interviews musicians, artists, and writers “without promotional pretext or editorial direction.” First in the hot seat: Tom Waits, who talks with Beck about growing up in Los Angeles, playing a show in an abandoned Japanese temple in minus-30-degree weather, and the sad fact that most art — including his own — will eventually disappear.

It’s a fascinating read, and Waits has plenty of personal thoughts to share, including this observation about the desire to have the best of everything:

“Where does this ‘best’ thing come from? Is that human? Is that American? Is it all over the world? Everyone wants the best eye surgeon, the best babysitter, the best vehicle, the best prosthetic arm, and the best hat. There’s also the worst of all those things available and they’re doing rather well. [Laughs] Denny’s is doing great. It’s always crowded. You have to wait for a table.”

Want more? Read the interview here. Then let us know what you think in the comments section!