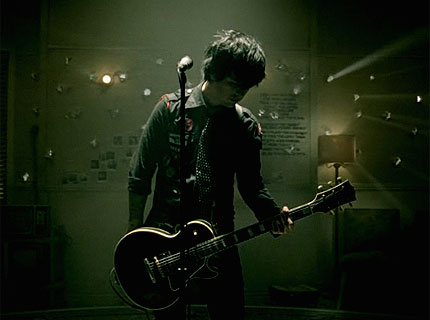 Love conquers all — even a barrage of gunfire.

That’s the message in Green Day’s new music video for “21 Guns,” the arena-filling second single from their latest rock opera, 21st Century Breakdown . The clip, directed Mark Webb (500 Days of Summer), shows a hot young couple on opposite sides of a disheveled motel room, separated by a barrage of bullets flying by and blasting holes in the walls, furniture, and even a fish tank.

Finally, the lovers (possibly Christian and Gloria, the central characters in Breakdown) take frontman Billie Joe Armstrong’s advice — “Throw up your arms into the sky / You and I / Give up the fight” — and unite in the middle of the room, bullets still flying, to embrace in a pose reminiscent of the album’s cover art.

We hope they had the time of their lives.

Check out the video below.Then tell us what you think in comments section. You can see the video for Green Day’s first 21st Century Breakdown single “Know Your Enemy” here, and browse their summer tour dates here.