Plus: The Southern songsmith joins with M. Ward and Conor Oberst as Monsters of Folk. Click here for details! 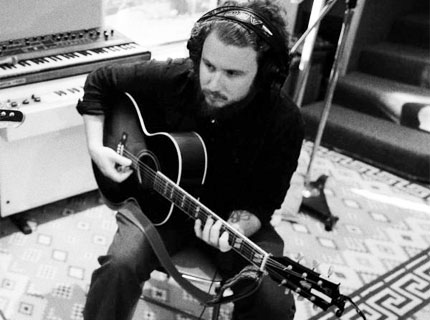 After a busy 2008 touring behind My Morning Jacket’s hit record Evil Urges, which landed frontman Jim James and Co. on the cover of SPIN, the band are taking a much-needed break. How does Mr. James spend his down time? By dusting off an old collection of George Harrison covers and changing his name “Yim Yames” to release ‘em. That’s right: Tribute To, James’ first solo release, will drop August 4 via MMJ’s label, ATO.

Tribute To was recorded back in 2001, just days after Harrison’s November 29 passing. The six-track set features Jim — sorry, Yim — on acoustic guitar strumming through Beatles classics “Long, Long, Long” and “Love You To,” plus Harrison’s solo gems like 1974’s “My Sweet Lord.” [Via Billboard.com]

If that wasn’t enough to keep the bearded singer busy, James has also joined forces with Conor Oberst, M. Ward, and uber-producer Mike Mogis to form the indie supergroup Monsters of Folk. The band’s self-titled debut will drop on September 22. A fall tour is also in the works.

After all that, well, James should take a nap.