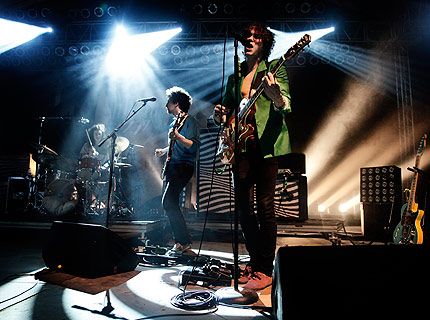 The warnings were abundant.

Backstage before Nine Inch Nails’ 1 A.M. performance Saturday night at the Which stage, as the band members marched between tour buses like warlords from some distant galaxy in their futuristic all-black get-ups, a pixie-like brunette was talking about MGMT’s late-night set — and so was everybody else. The Brooklyn psychedelic jesters were playing across the festival grounds at the That Tent in two hours, and the hype for the show had reached Bonnaroo ubiquity. This same warning has been on repeat, backstage at almost every show, all day long.

Sorry, Mr. Springsteen and Mr. Anastasio: MGMT were headlining Bonnaroo — and everybody knew it.

Forty-five minutes before MGMT went on, the backstage artist area had been put on lockdown and the crowd — who, thanks to a feat of scheduling surely in MGMT’s contract, had no competing shows to distract them — was growing. And when the boys finally took the stage and the first skittering beat of “Destrokk” broke over the speakers, the whole place lit up like a lava lamp, with multi-colored glow sticks shooting light in every direction. People were dancing. Some were crying (sensory overload?). Sixteen-year-old Jeff from Pittsburgh, standing by his lonesome toking a bowl, was a little shocked: “Whoa…. This is like some intergalactic carnival or something, right?”

MGMT — core duo Ben Goldwasser and Andrew VanWyngarden — have been playing the same 10 songs from their major label debut, Oracular Spectacular, for the past three years. And they could probably play them for 30 more.

The pair — fleshed out to a five-piece for this show — have taken their groovy psych-pop gems about Armageddon from their Wesleyan dorm rooms to Bonnaroo prime time and somehow managed to reinvent themselves as the ultimate festival band along the way: their music is ambient enough for the dub, DJ, and electro crowd; their hipster following is fawning and undying; the hippies love their noodling guitar and paisley outfits; and the random Booker T-lovin’ old-timers just want to gawk at the whole spectacle. The Boss dished out some big talk about building “the house of love,” but MGMT, well, they actually went and built the damn thing.

The band debuted a pair of new songs — one being an untitled piano-led track that recalled the bright psychedelia and flowing arrangements of the Zombies’ The Odyssey and the Oracle. The other, “Congratulations,” was a more standard MGMT fare (catchy synths, sing-along vocals) and is also the title track off their next album.

At one point, Chairlift’s Caroline Polachek joined them onstage to sing on a cover of 1980s mega-hit “Voices Carry” by ‘Til Tuesday, a group fronted by Aimee Mann. It sounded great — even from some 150 yards away, packed in tight next to two curious fans who were stretching for a view from on top of a dumpster.

“Kids” was the show’s high point (followed closely by “Electric Feel”). When the pulsing, airy keys kicked in, a gigantic roar let out. A group of youngsters cut open their 10-foot-long, glowing rods, flinging the nuclear green contents onto the crowd around them.

At Bonnaroo a stain isn’t just a stain, it’s a keepsake.