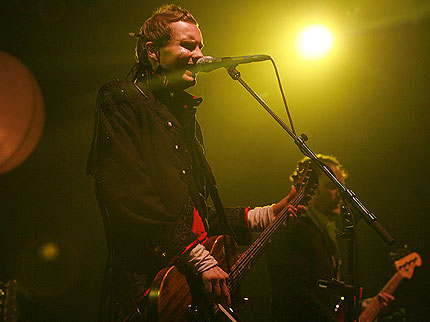 Sigur Rós frontman Jón Þór Birgisson and his partner, Alex Somers, have announced plans to release their self-titled debut album as Riceboy Sleeps, the side-project they formed in 2003.

Birgisson and Somers (who designs many Sigur Rós album covers and also performs in Icelandic pop outfit Parachutes) recorded the nine-track LP in Iceland “solely on acoustic instruments.” From there, the duo headed to a far corner of Hawaii, where they “endlessly toyed with [the record] on solar-powered laptops in a raw food commune.”

The album, which will drop July 20 in Europe, doesn’t have a U.S. release date yet.

Riceboy has released two singles: “All the Big Trees” (which sounds a bit like an orchestra tuning in a forest populated by elves shuffling over broken bits of glass) and “Daniell in the Sea” (which sounds like your computer is haunted by peace-loving spirits). Check out the music videos for each instrumental track below.

Riceboy Sleeps, “Daniell in the Sea”

Riceboy Sleeps, “All the Big Trees”