Amy Winehouse to Collaborate with Gorillaz? 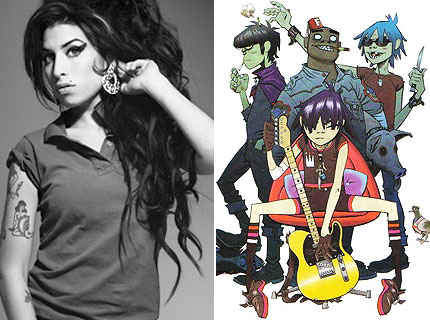 Amy Winehouse recently returned to her favorite vacation spot, Caribbean island St. Lucia, with a mission: record that pesky new album. And apparently the trip may lead to fresh tunes — but not necessarily for Winehouse’s record!

The singer has reportedly signed on to guest on the new album from Damon Albarn’s band the Gorillaz, citing the fact that her latest reggae-inspired work (which was rejected by her own label) fits in with the style of the Blur frontman’s cartoon group. [Via Mirror.co.uk]

Apparently when Winehouse’s label got wind of her plans, they were less than pleased.

A source said that the folks at Universal (the parent company for Winehouse’s label Island Records) “hit the roof…. It’s an unnecessary distraction. They think she should invest all her energy in her own music. She should be knuckling down and delivering the goods.”

And by “goods” they mean the “good stuff” — not the reggae-inspired material she’s been working on. “They want Amy to get cracking on her new album, but the results have so far not been up to scratch. Imagine how they felt when they realized she had agreed to work with Gorillaz? They couldn’t believe it.”