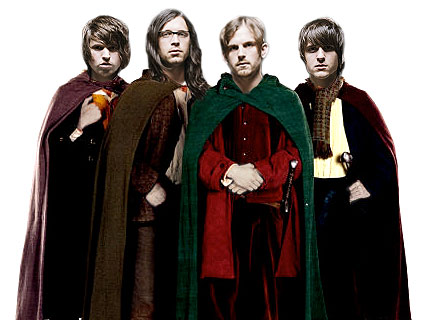 The Kings of Leon tapped London conjuror Sav for magic lessons. Meanwhile their grandfather Leon, a longtime preacher, has asked the band to rescind their name. [Chartattack]

Weezer are rumored to be opening blink-182’s reunion tour. Guys, say it ain’t so. [Buzzgrinder]

If the Flaming Lips’ “Do You Realize??” is Oklahoma’s official rock song, what are the other 49 states spinning? Well, California has the Full House theme… Bob Saget rejoices. [Idolator]

Want to be the next mix-master mega-star? Check out this drum machine, powered by touching the keys on your computer’s keyboard. FYI: Swearwords sound best. [Ronwinter.tv]