The actor-cum-rapper is dragged offstage by security guards. Click here for details! 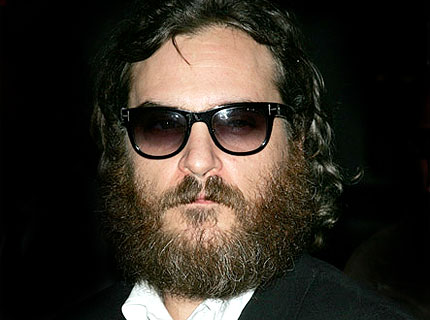 It’s hard out there for a pimp — and, also, for Joaquin Phoenix’s hip-hop career.

During his performance in Miami Beach, FL, last night, the aspiring (and possibly conspiring) rapper had a dramatic run-in with a heckler — no, it wasn’t Ben Stiller — and ended up being hauled off by security guards.

Phoenix headlined a party — aptly-titled “Dirty Hairy,” no less — at the Fontainebleau Hotel’s Liv nightclub. He reportedly kept fans waiting four hours before emerging onstage just before 2 A.M., smoking a cigarette and wearing a dark suit and sneakers. After he began rapping — unintelligibly, according to reports — he turned his attention to an audience member who may have been heckling [via Associated Press].

“We have a (double-expletive) in the audience,” Phoenix said before jumping into the crowd.

“I saw the guy screaming at Joaquin, and Joaquin just came down,” a concertgoer confirmed.

Security guards then dragged the performer back on stage and escorted him away. It is unclear is punches were thrown or if anyone was injured.

With him as always, to capture the action, was documentarian pal (and brother-in-law) Casey Affleck. And good thing, because it all sounds really cinematically compelling — you couldn’t have written it better. It’s almost like it was staged… or a hoax. But we know there’s no way that’s the case.