The Outsiders: Cut Off Your Hands 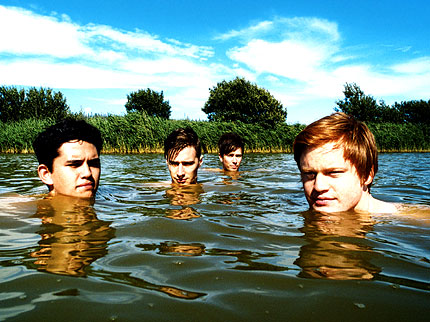 [INSERT SHEEP-HUMPING JOKE HERE]: No band is an island. But according to Nick Johnston, singer for Auckland, New Zealand’s Cut Off Your Hands, it helps to be from one. “Because the country is so isolated,” explains the 24-year-old frontman, “our music ends up being very pure. It’s hard to rip off interesting bands if you never see them play.” In early 2006, inspired by the albums he’d order from D.C.’s legendary punk label Dischord, Johnston formed Shaky Hands with his friends Michael Ramirez (guitar), Phil Hadfield (bass), and Brent Harris (drums). They’d played 120 shows within a year before a cease-and-desist from a similarly named Portland, Oregon act inspired their grisly rechristening but didn’t slow their momentum. Three EPs of tuneful post-punk, one of which was produced by Bernard Butler (Duffy, Black Kids), have the band primed to go global. “We’re considering moving to New York,” says Johnston. “We want the competition.”

PHIL SPECTOR, AMERICAN HERO: The aforementioned EPs crackled with youthful vigor — occasionally at the expense of the songs. But You and I, the band’s debut full-length (also produced by Butler), has no such issues. “We realized we could do more than bash away,” Johnston says. The album deftly mixes taut guitar rock reminiscent of Arctic Monkeys (“Expectations”) with nostalgic ballads (um, “Nostalgia”), all buoyed by expansive melodies rooted in a gift from Butler. “He gave me the Phil Spector box set,” gushes Johnston. “I’d never realized how good those songs were!”

MIGHT AS WELL JUMP: Laconic off stage, Johnston is a Tasmanian devil on it. “I’ve broken bones,” he says, “mostly from jumping off balconies. I’ll climb up and see there’s no way to get down.” The shame smarts more than the busted tibias. “I hate telling doctors how I got hurt. They always ask if I’m an acrobat or something. I have to tell them I’m just a stupid musician.”

David Marchese
Tags: big in 09, cut off your hands, This Is Happening