Click here for the title track -- and music video -- from the rock legend's upcoming album! 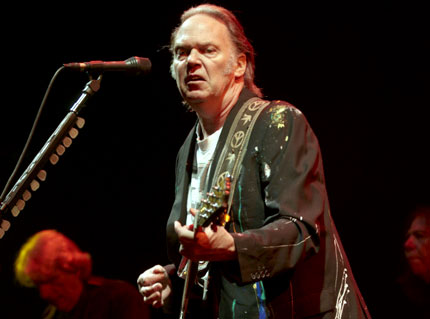 Last December, Neil Young revealed plans to release a “mindblowing” new record, Toast, with his longtime backing band Crazy Horse. However, it looks like that album is on the backburner, as details have surfaced about another new release: Fork in the Road, the title track from which has just hit the web!

An album release date has yet to be announced, but the title song is available to stream — along with an accompanying video — at Young’s official website now. The video is bizarre, with Young singing into the camera while wearing headphones that are plugged into an apple (an iPod shout-out, perhaps?). But the track is to the point, a Chuck Berry-style rocker that would have fit on 1988’s underrated gem This Note’s For You.

Listen to “Fork in the Road” here, and watch the video here. And then leave your thoughts in the comments section below.