Hear a tune off the post-hardcore band's next album before its Feb. 17 release! 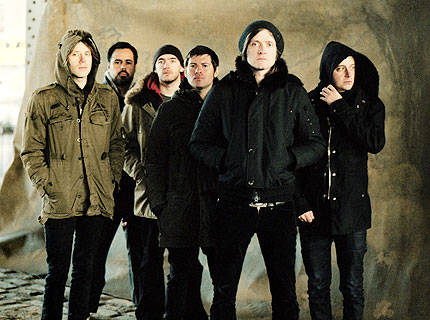 New Jersey post-hardcore band Thursday will release their first album in three years, Common Existence, February 17 via Epitaph Records. But for impatient fans, SPIN.com has just the thing — an exclusive leak of “Friends in the Armed Forces,” a rockin’ single off the upcoming record!

In a recent interview with SPIN.com, frontman Geoff Rickly discussed the tune’s creation in the studio with producer Dave Fridmann (Flaming Lips, MGMT). “The basis of the song is the driving and guitar oriented approach of post-hardcore band Quicksand — Walter Schrieffels of Quicksand actually contributes some vocals to the track — with some atmospheric guitars and keys from the My Bloody Valentine era.Then we turn the whole thing up and Fridmann cooks it at 475 degrees Fahrenheit for 55 minutes until it’s nice and crispy.”

The track’s lyrics and title come from a personal experience. “I have a close friend in the service and several others that have finished their tours,” Rickly told SPIN.com. “The song was inspired by my conversations with them and by my conversations with their family members. It’s about the shifting of perspective when it comes to wrong and right — ultimately, the song is a wish for peace and well being for my friends.”

Listen to “Friends in the Armed Forces” below. Then leave your thoughts about Thursday’s new song in the comments section.