The Irish hitmakers return to the states with anthemic tracks from A Hundred Million Suns. Click here for photos and a full review! 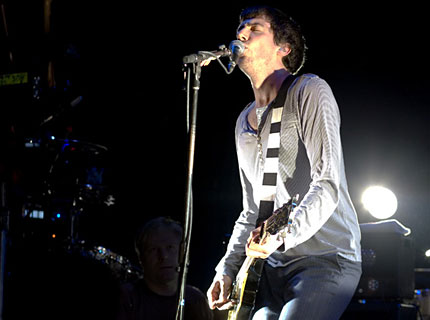 Snow Patrol may have began as an indie rock band, but over the course of 10 years and five albums, frontman Gary Lightbody and Co. have created their own lovesick brand of commercially viable mid-tempo pop rock — the kind their fans have come to adore. And last night on the opening date of the group’s U.S. tour, Snow Patrol’s sound bloomed further as the band unveiled the anthemic tracks off their just-released new album, A Hundred Million Suns.

Playing at New York City’s jam-packed Bowery Ballroom — a surprisingly small venue choice considering their popularity level — the Scotland-bred/Ireland-based quintet, joined by Belle and Sebastian’s drummer Richard Colburn on percussion and keyboards, built a wall of perfect sound during their hour and a half set. Lightbody, confident to the point of cocky, chatted between songs, cracked jokes, and got the crowd singing along to “Shut Your Eyes.” However, what made him particularly stand out was the purity and resilience of his voice, even more remarkable live than on record.

Lightbody led the band through their catalog of hits from 2003’s Final Straw, their breakthrough sophomore album, 2006’s Eyes Open, and A Hundred Million Suns. Among the standouts were “Run,” a fist-pumping rendition of “Chocolate, the new album’s arena-filling single “Take Back the City,” their biggest hit yet “Chasing Cars,” and “Set Fire to the Third Bar,” for which the band brought on stage Alicia and Josh, an adorable young duo known for their sweet versions of popular songs on YouTube.

The night proved that Snow Patrol have mastered one of the cardinal rules of commercial success and relative longevity in the music industry: knowing exactly what their audience wants, and giving it to them straight.

Setlist:
“If There’s A Rocket Tie Me To It”
“Chocolate”
“Please Just Take These Photos From My Hands”
“How To Be Dead”
“Run”
“Set This Fire To The 3rd Bar” (w/the 2 kids singing)
“The Golden Floor”
“Shut Your Eyes”
“Chasing Cars”
“Make This Go On Forever”
“Crack The Shutters”
“Take Back The City”

Diana Pastrana
Tags: snow patrol, We Were There