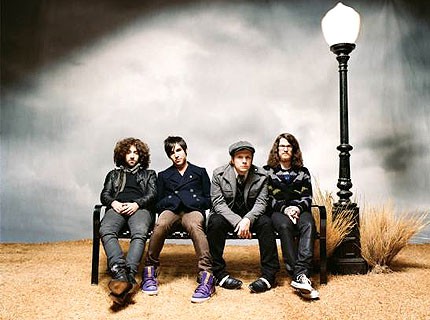 What? Like High School Musical on a fieldtrip to the Warped Tour, the unabashedly theatrical Fall Out Boy bring an anthemic sheen to every track on their new album, Folie à Deux, out today. They may be known for their emo and pop-punk sound, but here the quartet distinguish themselves by lyrically recanting emo’s crybaby rep — they cop to debauchery-ridden activity (see: “detox to retox” chorus on “Disloyal Order of Water”) and dis the genre’s tendency toward Bell Jar melodrama (“The Shipped Gold Standard”). Still, they’re careful not to alienate longtime fans: “What a Catch Donnie”‘s half-winking, half-bragging chorus — “I’ve got troubled thoughts and the self esteem to match / What a catch” — is one of the record’s catchiest and comes complete with an Elvis Costello cameo. The boys cement their celebrity status and reveal genre crossover aspirations on “w.a.m.s,” which dials down the outfit’s standard grandiosity with unadorned blues vocals courtesy of Pharrell.

Who? Vocalist/guitarist Patrick Stump, bassist/lyricist Pete Wentz, drummer Andrew Hurley, and guitarist Joe Trohman formed Fall Out Boy in 2001 in their Chicago suburb hometown of Wilmette, IL. After self-releasing a demo and mini-LP, the band signed with Fueled by Ramen, who put out their debut album, 2003’s Take This to Your Grave. Their breakout record followed in 2005: From Under the Cork Tree established the musicians as flag-bearers for fans seeking Green Day-with-a-hyper-literate-drama-geek twist. Follow-up, Infinity on High, perpetuated the quartet’s winning streak on the back of stadium-ready sing-alongs like “This Ain’t a Scene, It’s an Arms Race,” propelling the outfit to chart-topping heights.

Fun Fact: The band’s moniker originated when, after playing their first two shows nameless, they asked the audience to yell out their suggestions.A fan shouted “Fall Out Boy” and the name stuck. It references a minor character from The Simpsons.