Performing with original Against Me! drummer Kevin Mahon, the roaring frontman digs deep into his catalog. Photos and setlist here! 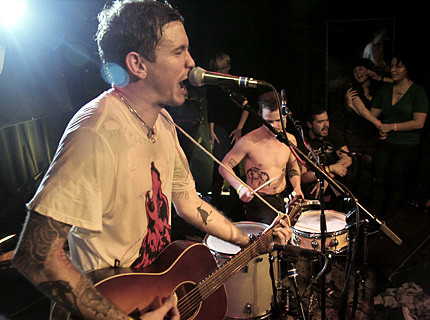 There’s something to be said for never forgetting where you came from. Since founding Against Me! a dozen years ago, frontman Tom Gabel has gone from recording acoustic rants on crackling cassette players as a 16-year-old cynical anarcho-punk to crafting the slick, radio-ready sounds of SPIN’s 2007 album of the year. But last night at New York’s Knitting Factory, it was all about those analog roots, as Gabel churned out a litany of old and obscure songs.

A white T-shirt-clad Gabel took the stage armed with only an acoustic guitar. He set up next to a makeshift drum set and opened the gig with a brand new song about a recent dream centered around Bob Dylan before segueing into two songs off his new solo EP, Heart Burns: “Random Hearts” and “Anna Is a Stool Pigeon,” which tells the tale of a political activist double-crossed by an FBI informant. But from then on it was a blast from the past.

Gabel played a few Against Me! songs like the tender “Joy” and the impassioned “Jordan’s First Choice” before introducing a special guest on drums. Kevin Mahon, his sideman when Against Me! was only a duo, joined the now invigorated screamer for the first time in seven years and they blazed through guttural and frantic versions of songs from the full breadth of Gabel’s back catalog.

The duo played the entirety of 2001’s Crime As Forgiven by Against Me! EP, as well as selections from The Acoustic EP. Gabel touched on fan favorites like the raucous “Those Anarcho Punks Are Mysterious…” and the furious, rarely-played “Burn,” truly igniting the crowd.

“May the likes of this song never make one fucking dollar / Leave it for a demo tape to be played until it’s broken / Then remembered only for what it was,” everyone sang in unison on “What We Worked For.” To his own disbelief, Gabel absolutely earned dollars from songs like these, songs that, on nights like this, are not remembered, but experienced exactly for what they are and continue to be.

“I Dreamed Bob Dylan Was a Friend of Mine”
“Random Hearts”
“Amputations”
“Joy”
“Harsh Realms”
“Anna is a Stool Pigeon”
“Wagon Wheel”
“Jordan’s First Choice”
“Tonight We’re Gonna Give It 35%”
“Walking is Still Honest”
“What We Worked For”
“Those Anarcho Punks Are Mysterious…”
“I Still Love You Julie”
“Shit Stroll”
“Impact”
“Ya’ll Don’t Wanna Step To Dis”
“Burn”
“We Did It All for Don”
“8 Full Hours of Sleep”
“Sink, Florida, Sink”

More photos after the jump! >>

Joseph Coscarelli
Tags: against me!, Kevin Mahon, tom gabel, We Were There