On the anniversary of the singer/songwriter's death, read SPIN music editor Charles Aaron's review of Smith's final album, From a Basement on a Hill. 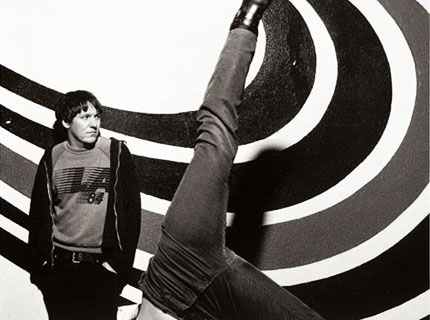 Five years ago, in a kitchen on a hill in Los Angeles, Elliott Smith died from knife wounds to the chest (the case is still open, but many presume that he committed suicide). He was 34. Today, Smith’s music — heartfelt, hushed, and tuneful — continues to influence musicians and lure listeners into his stark world, one that was rife with mental torment and its physical consequences. His sixth and final album: From a Basement on a Hill, is a collection of tracks partially completed upon Smith’s death. Below, read SPIN music editor Charles Aaron’s review of the excellent album, a review that, in many ways, acts as a obituary for the decisive songwriter.

Elliott Smith, From a Basement on the Hill (Anti-)
The folk-punk hero fights his farewell battle.

Suicide, especially when a celebrity is involved, is inevitably viewed by pundits as a cop-out — an ungrateful denial of the human covenant. Unlike the rest of us, say, who still nobly scrape by with so little, the deceased quit cold, despite having had so much.This rather ungenerous piety was heard years ago when Kurt Cobain ended his stint as generational seraph. It’s been heard less frequently since the death last year of Elliott Smith. That’s partly because Smith’s death has yet to be officially ruled a suicide, and partly because, in life, he shied away from the spoils of fame — especially after receiving an Academy Award nomination in 1998. But it’s also because when it came to his music, Elliott Smith never quit on anything.

From 1994 through 2000, Smith recorded five albums of fearless songs about loneliness, addiction, and betrayal, sung in a tremulous tenor over his own piano, drums, and fingerpicked guitar. The post-Nirvana walking wounded, raised on punk’s righteous clamor and bruised by its mainstream compromise, looked to his hushed, unflinching songs for comfort. And Smith’s uncommon devotion to detail — as if he were distilling the withering familial dialogue of Long Day’s Journey Into Night scene by scene — gave his songs a universal resonance. On 1998’s “Waltz #2 (XO),” he tracks, note by note, how desperately he wants to understand his now-remarried mother, realizes he never will, declares his love anyway, then asks to be left alone. Smith was bound by a belief that a song had to question, even undercut, its own meanings to get anywhere close to the truth.

And for better or worse, that’s the burden that haunts Smith’s sixth record, From a Basement on the Hill, conceived as a 30-song opus a la the Beatles’ “White Album” but now a more modest, 15-song collection overseen by Smith’s estate. The album’s posthumous completion was entrusted to former producer Rob Schnapf and musician/onetime girlfriend Joanna Bolme, but Smith’s intentions cry out from the album’s every discordant corner — he clearly wanted to test himself, to unhinge parts of his sound. Maybe it was the drugs chattering in his ear, but Smith wanted to see what would happen if he collapsed the album in on itself — and whether he could dig his way out.

The opener, “Coast to Coast,” hints at Smith’s vision — a faint, tense, symphonic flourish drifts into a harsh, detuned guitar riff, restless drums, and his muffled voice. He repeatedly beseeches a co-dependent loved one to go because he’s helped her all he can and he’s “got no new act to amuse you”; but the claustrophobic arrangement seems to drag them down together. On the bright, jauntily picked “Let’s Get Lost,” Smith longs to burn his bridges and move on, but there’s no trace of relief. “Don’t Go Down,” an oddly hopeful waltz, crumbles up multiple tracks of guitars and drums. And on “Fond Farewell,” which has the album’s most tender, upbeat melody, Smith ends up vomiting into the kitchen sink and mourning how he can’t recognize his life anymore. It’s eerie to hear him struggle to escape from the very start of the record. It’s doubly eerie to hear the songs seemingly block the exits.

Perhaps the album’s emblematic moment is “King’s Crossing,” which eases into an almost-ragtime piano as Smith’s ghostly double-tracked voice sing-songs through an ominous echo chamber of guitar, drums, and organ. But instead of the secret wishes and fears he once exhaled through gritted teeth, Smith lets loose a bold lyrical declaration worthy of Elvis Costello circa King of America, with metaphors piling up (dominoes, tidal waves, fireworks) before he states flat-out, “I can’t prepare for death any more than I already have.” Then, in an instant, the ragged assemblage begins one last crescendo, as if the singer is falling apart with a beatific, shit-eating grin. He’s got no sex life, he doesn’t care if he fucks up, and he even drops a morbidly funny aside: “I’m going on a date with a rich white lady / Ain’t life great?” Finally, he shudders, unsure which way to turn, demanding, “Give me one good reason not to do it!” and pleading, “Don’t let me be carried away.”

And then everything fades to nothingness. Obviously, Smith didn’t find a reason to continue his life — to endure what he called the “cold comfort of the in-between.” And he’ll never finish this album, which remains a sketchy attempt to read a very depressed mind. But in the music, in these songs, the guy’s still with us. And he’s still fighting his heart out.