Echo and the Bunnymen Get Nostalgic in New York

With a string section behind them, the post-punk pioneers play their 1984 magnum opus Ocean Rain at Radio City Music Hall. 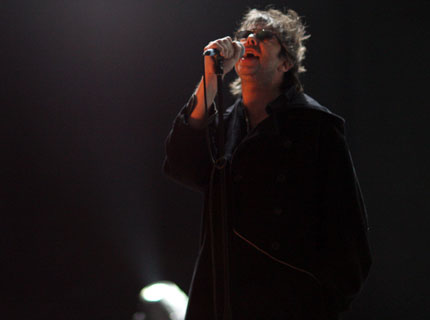 Liverpool-bred post-punk legends Echo and the Bunnymen commanded New York City’s iconic Radio City Music Hall Wednesday night with a set of lush anthems that illustrated just how many bands they’ve influenced. How many? Seemingly every stark, rock music-playing act to strum a note since the Bunnymen’s birth in 1978.

With tunes from across their catalogue, from the early days as new-wave pioneers to their more mature sound of late, Echo and the Bunnymen played flawlessly during their first set, churning out rivers of guitar reverb on tracks like the band’s catchy stateside hit “Lips Like Sugar.” On every song, singer Ian McCulloch’s aged-to-perfection pipes delivered true feeling.

But it was the second set, the performance of 1984’s Ocean Rain, that truly amazed the crowd. From the opening chords of “Silver” it was obvious everyone was in for a treat, as the band — and a 10-piece orchestra conducted by Rupert Christie — performed the record from in full, the way it was meant to be heard. As the last notes of the bone chilling “Killing Moon” came to a close, McCulloch addressed the audience. “I’ll tell you sincerely,” he dryly confessed. “I’m having a fantastic time.”

Benjamin Felton
Tags: Echo and the Bunnymen, We Were There

Violent Femmes Working on New Album, Announce Tour With Echo and the Bunnymen