The Rage Against the Machine axeman turns down the volume and cranks up the political outrage on his new album. 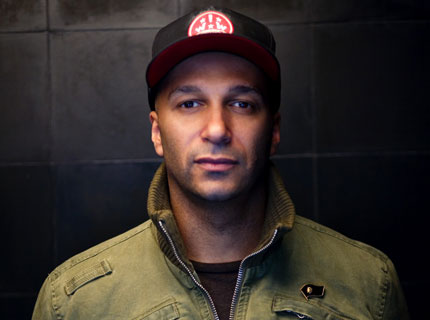 What? Tom Morello’s electrified six-string blasts and squeals formed the bedrock that anchored frontman Zack de la Rocha’s righteous fury, making Rage Against the Machine one of the most exciting bands of the 1990s. You wouldn’t necessarily know it now, though. Morello has traded his guitar heroics for earnest folk rock as the Nightwatchman. There’s a sense of danger here, sure — “Whatever It Takes,” off his new record The Fabled City, is a call to revolution: “I’ll meet you now wherever you are / I’m here until the frontline breaks,” he sings.And even his stage name calls to mind a sort of aesthetic vigilantism. But Morello’s mimicking of Tom Waits’ and Bruce Springsteen’s vocal intonations while throwing Public Enemy-style firebombs is discomfitting. Political justice, at least for Morello, is better served by shredding out Pennsylvania Avenue-splitting guitar anarchy onstage with Rage.

Who? In the ’90s, Morello helped redefine a guitar’s limitations for a generation of alt-rock youths who grew up thinking solos weren’t necessarily cool, all while insisting that political manifestos go over easier set to a ripping backbeat. With Rage Against the Machine flaming out after magnum opus The Battle of Los Angeles in 2000, Morello and bandmates Brad Wilk (drums) and Tim Commerford (bass) formed Audioslave with Chris Cornell of Soundgarden fame in 2001. Audioslave broke up and Rage reunited in 2007, but all the while Morello has maintained his side work as the Nightwatchman. Although he performed live as early as 2003, his first record under the name came out in 2007. The Fabled City drops September 30.

Fun Fact: From Rage to the Nightwatchman, Morello’s work has always been politically-focused, and he’s got the chops to back it up: Morello graduated from Harvard (with honors!) with a degree in political science.

Now Hear This: The Nightwatchman, “Whatever It Takes” (DOWNLOAD MP3)