Watch "Stuck on a Boat" and "In Vino Veritas," both off the sea-lovin' folkies' latest, All We Could Do Was Sing. 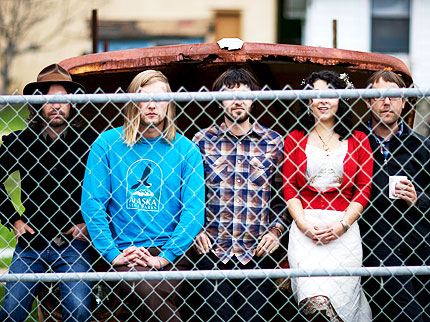 Bay Area quintet Port O’Brien recently shot not one, but two videos on Super 8 reels, borrowing from the style of 1920s silent movies by applying a deliberate, but naturally worn, sratchy quality to match the band’s pastoral folk aesthetic. Both “Stuck on a Boat” and “In Vino Veritas” were filmed in the band’s hometown of Cambria, CA, by director Joey Izzo.

“It was really important to me that every scratch was genuine and authentically created,” Izzo tells SPIN.com. “No digital effects were used on these music videos. We wanted to give Port O’Brien something unique and special — something that didn’t look common and couldn’t easily be replicated.” Mission accomplished. Check out the exclusive premiere of the videos below.