With an overdose of soapbox preaching, these onetime blog darlings epitomize sophomore slump on Loyalty to Loyalty. 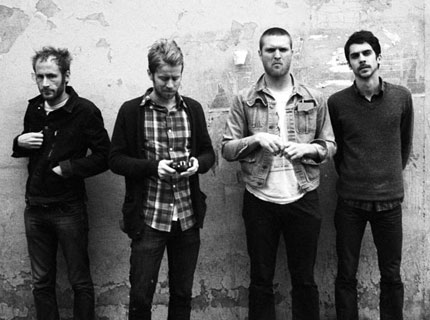 What: A couple years ago, these fresh faced Californians charmed the blogeratti and faced the burgeoning hype — and subsequent backlash — that swirled around their every mention as Robbers & Cowards, the quartet’s collection of raw, soulful and bluesy chant-along jams, proved a ubiquitous feast for music fans. But with a debut dish as appetizing as Robbers & Cowards, the pressure for an equally delicious follow-up continued to simmer right up until this week’s release of Loyalty to Loyalty. The album, a collection predominantly based in the band’s characteristic saloon-style blues and jangle, props frontman Nathan Willett’s whining falsetto and overkill narrative up on a soapbox. And the results may spur musical backlash thrust upon the boys’ Bible school background the first time around.

Who: Born from loose jam sessions in a Fullerton, CA, apartment, the Kids — Willett (vocals/guitar/keys), Matt Maust (bass), Jonnie Russell (guitar), and Matt Aveiro (drums) — made noise early on with a handful of infectious EPs, which saw the band tour the nation non-stop for nearly two years. Downtown Records, home to an eclectic array of artists, picked up the quartet and released Robbers & Cowards — essentially a gathering of the band’s leftover works — in 2006. Fans were tied over in ’07 with CWK’s cover of “Electioneering” for the 10-year anniversary tribute to Radiohead’s Ok Computer, entitled OKX, while the boys forged Loyalty to Loyalty.

Learned Fact: According to lead singer Nathan Willett, Loyalty to Loyalty’s title was taken from a treatise written by Objectivist philosopher Josiah Royce.

Now Hear This: Cold War Kids, “Something Is Not Right With Me”(DOWNLOAD MP3)